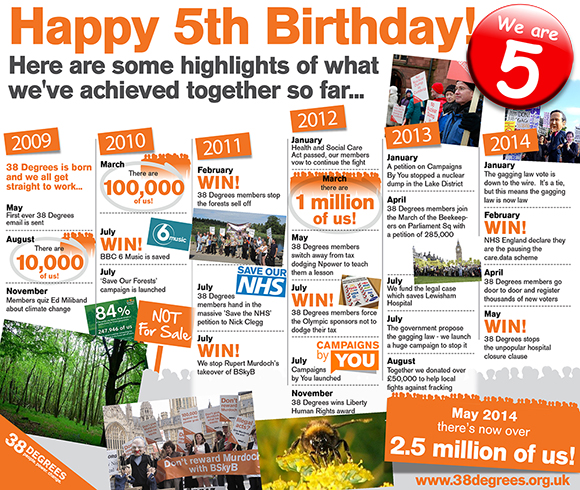 HAPPY BIRTHDAY EVERYONE! Exactly 5 years ago today 38 Degrees sent its first ever email!

Since then we’ve grown into a movement of 2.5 million people. A movement which exists to promote positive social change, to protect the environment and to challenge injustice.

Thank you so so much to everyone who’s joined in on this amazing journey! Here’s to the next five years!

What’s been your favourite campaign or moment? What campaigns have you been involved in? What should we do next?

Here are some of the highlights from the past 5 wonderful years:

2013
Jan 2013: A petition on Campaigns By You stopped a nuclear dump in the Lake district
April 2013: 38 Degrees members join the March of the Beekeepers on Parliament Sq with a petition of 285,000
May 2013: 38 Degrees members switch away from tax dodging Npower to teach them a lesson
July 2013: The government propose the gagging law – we launch a huge campaign to stop it
August 2013: Together we donated over £50,000 to help local fights against fracking
Nov 2013: Members gave £477,143 to help the Typhoon relief effort in the Philippines