Yesterday 38 Degrees members in York, Basingstoke, London and Leicester met up to hand-in our huge petition for better transparency in NHS England to NHS England representatives.

The hand-ins coincided with NHS England’s own ‘Open House’ events taking place in these four locations across the country.

As well as handing in our 140,000 signatures strong petition, 38 Degrees members gave bright orange tote bags, stuffed with information on the need for better transparency in NHS England, to all the delegates going into the Open House events. 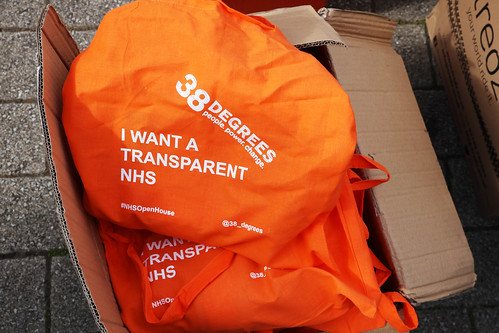 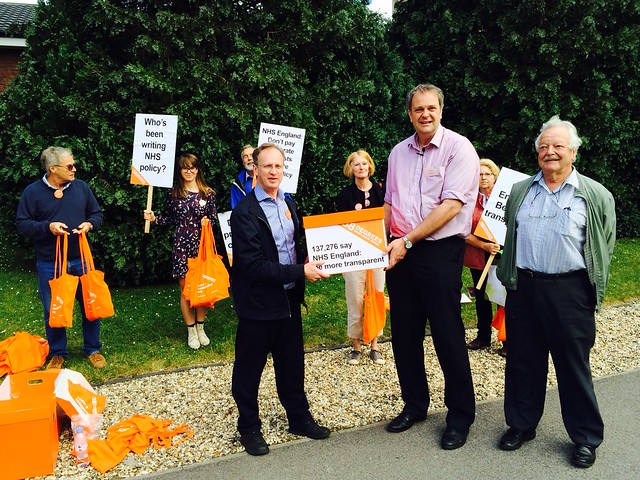 Together, we were asking delegates to demand NHS England answer three key questions;

Those of us who couldn’t attend the events also got involved by Tweeting our concerns to NHS England using their #NHSOpenHouse hashtag. 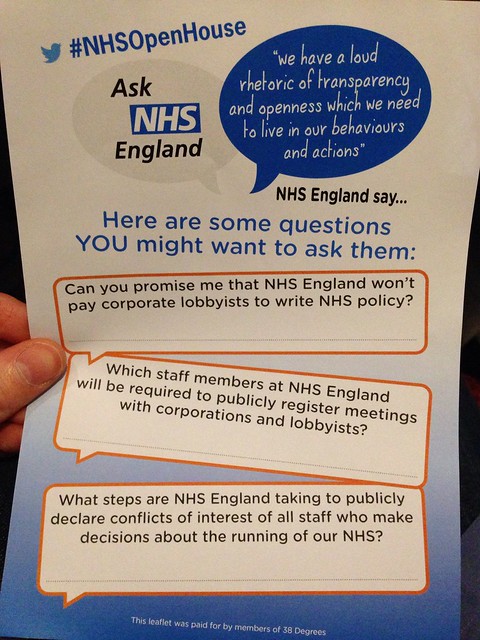 38 Degrees members were met outside each of the events by NHS England’s regional Directors for Patients and Information: Julia Hickling in York, Jane Barnacle in London, Alan McDermott in Leicester and Giles Wilmore in Basingstoke.

In York, 38 Degrees members were also invited into the Open House conference after we’d campaigned outside and spoken to delegates going inside. 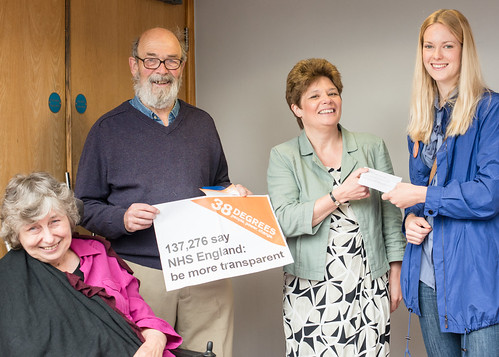 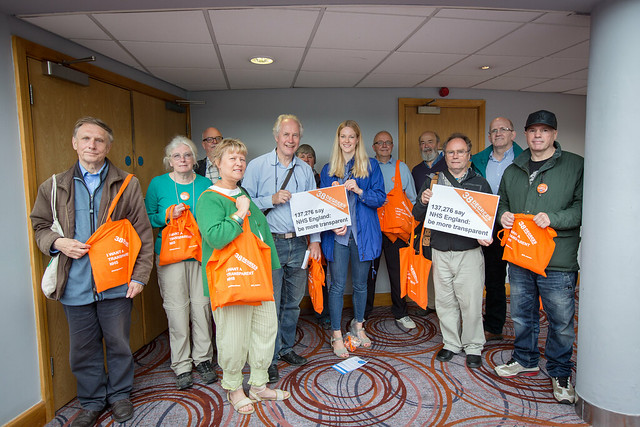 Inside the conference we posed questions on privatisation in the NHS, and expressed our concerns about Care.data. We made it clear that any data sharing should not put private medical providers at an advantage over NHS providers. 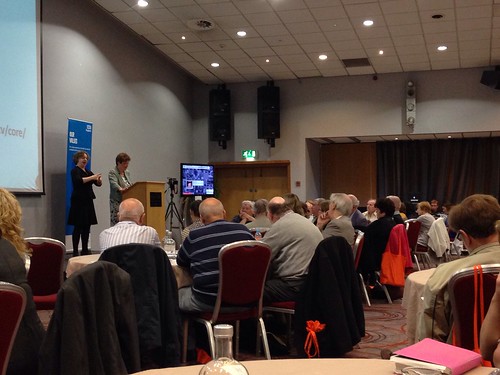 In Basingstoke, director Giles Wilmore said he was very happy to engage with patients and the public and encouraged a high degree of interest and communication with 38 Degrees members.

In Leicester, 38 Degrees members grilled the local director on NHS England transparency and handed in our petition.

Suresh Chauhan, a 38 Degrees member at the Leicester event, wrote this summary of what happened:

“The petition handing effort this morning in Leicester was quite impressive. Blanche Jones from the 38 Degrees office team was there together with 26 others. The petition was handed to Alan Mcdermott, the Regional Director Patients & Information, NHS England. He covers the Midlands and East.

Before we gave him the petition we highlighted to him the urgent need for NHS England to be transparent about its dealings with private providers and lobbyists. We also complained that we had not had a response to our invitation for a meeting with Simon Stevens, Chief Executive of NHS England. A colleague from an NHS trade union gave him his contact details and Alan promised to write to him.

But whilst this was being done, an official from the Tigers Stadium, where the event was being held, was trying to push us away from the front entrance to the edge of a car Park, 15 yards away. Luckily, the local paper, Leicester Mercury had sent their Health correspondent together with a camera person.

Five of us were allowed to attend the Open House meeting. I would think that there probably about 95 people in attendance including about 20 NHS England staff. The meeting was linked to similar meetings in York, Basingstoke and London. From our point of view, the event was well organised and attended/supported.” 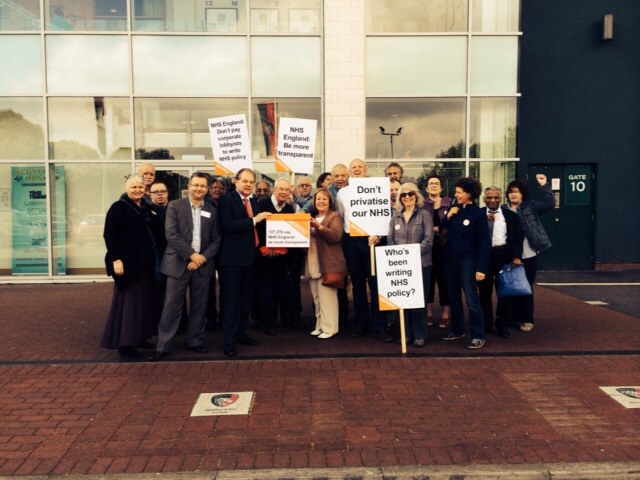 In Islington, London, there was a great turnout. 38 Degrees members split into teams so we could speak to everyone going inside the conference. 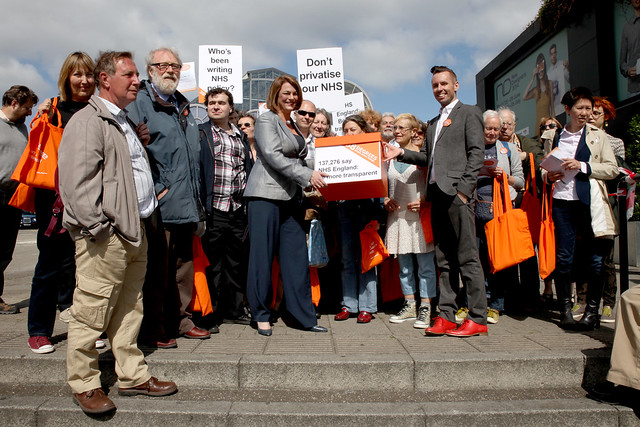 We ran out of flyers having talked to so many people about the need for transparency in our NHS – including members of the public to get them involved in the campaign too.

NHS England staff came to collect the petition and read a statement from Simon Stevens, Chief Executive of NHS England, which basically said that they would introduce a register of lobbyists who meet directors from next month. An NHS England spokesperson said:

“Simon Stevens is keen that NHS England continues to be transparent in its dealings with the public. It is grateful to 38 degrees for raising this as an issue as we can always find ways to be even more open. Simon has already indicated that he wishes to publish details of external meetings held by NHS England national directors so patients can see how we work. These details and Simon’s response to the petition will be published early next month.”

“What about all the other staff you have working for you?” we asked. “It’s a good step, but it’s not far enough!” We’ll wait to see how far NHS England meet our three demands in our people-powered petition.

The head of communications from NHS England also came over to us and said that they would have another announcement in July on transparency in our NHS. “We don’t want to promise things before we can deliver on them”, they said.

All in all the petition hand-ins across the country were a success. 38 Degrees members spoke with hundreds of people going into NHS England’s Open House days, and we got transparency firmly on the agenda and in the minds of NHS England staff at the events. 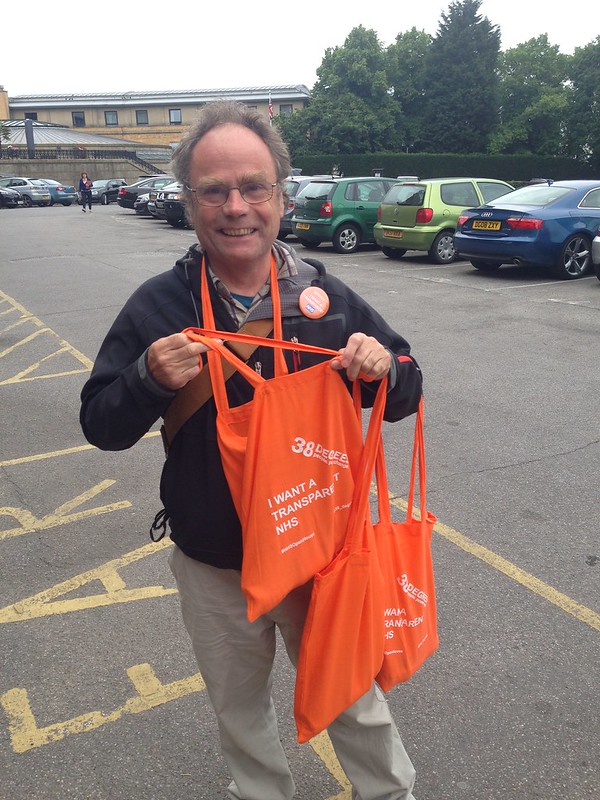 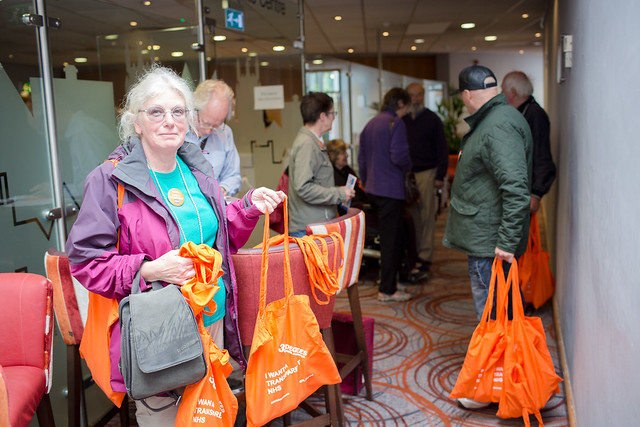