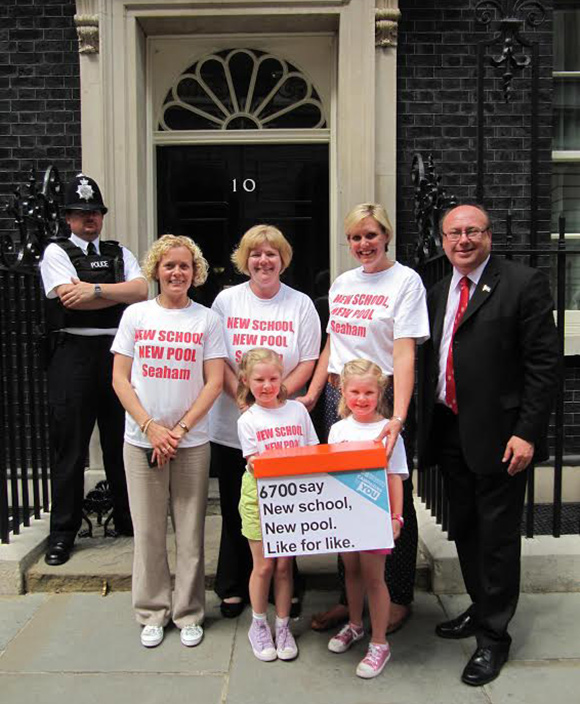 On Thursday 17th July 5 members of the New School – New Pool (like for like) campaign  headed down to Downing Street to hand over their petition of 6,700 signatures to David Cameron. The five travelled by train from their small ex mining town of Seaham on the East Coast of County Durham down to the capital London.

Seaham School of Technology was due to get a new school under the old Building School’s for the Future programme by the last government however due to the change in government this scheme was abandoned and their plans were halted.  However funds from central government have now been released to build a new school however the new school fails to have the same facilities as the existing one.

Kay Temple, a 38degrees member, started the petition back in December 2013 and has had the support of the community behind her.  She found out about the new school not having the pool and thought it was unfair and unjust for the future children of Seaham to lose out on the only decent sized learning pool they have in the town.  She wanted to make people aware of what they were losing and found that lots of people were actually in the dark about the school and losing their swimming facility, this then prompted her to set up the petition.

The Seaham Community has been brought together by this petition and they are asking for the government to replace the school with like for like.

Local MP Grahame Morris has supported the campaign from the off and his office in London arranged for the team to hand over the petition to David Cameron at 10 Downing Street.

As well as the online petition, numerous paper copies of the petition had been handed around the community in places of work, community centres, libraries, and local businesses and the combined total of signatures supporting the cause came  to 6,700.

Like Kay, If there’s an issue close to your heart, then you can start a campaign on Campaigns by You.  Thousands of people are already running campaigns on a whole range of issues, from protecting our public services like busses and libraries, through to saving our NHS or even saving local beavers!