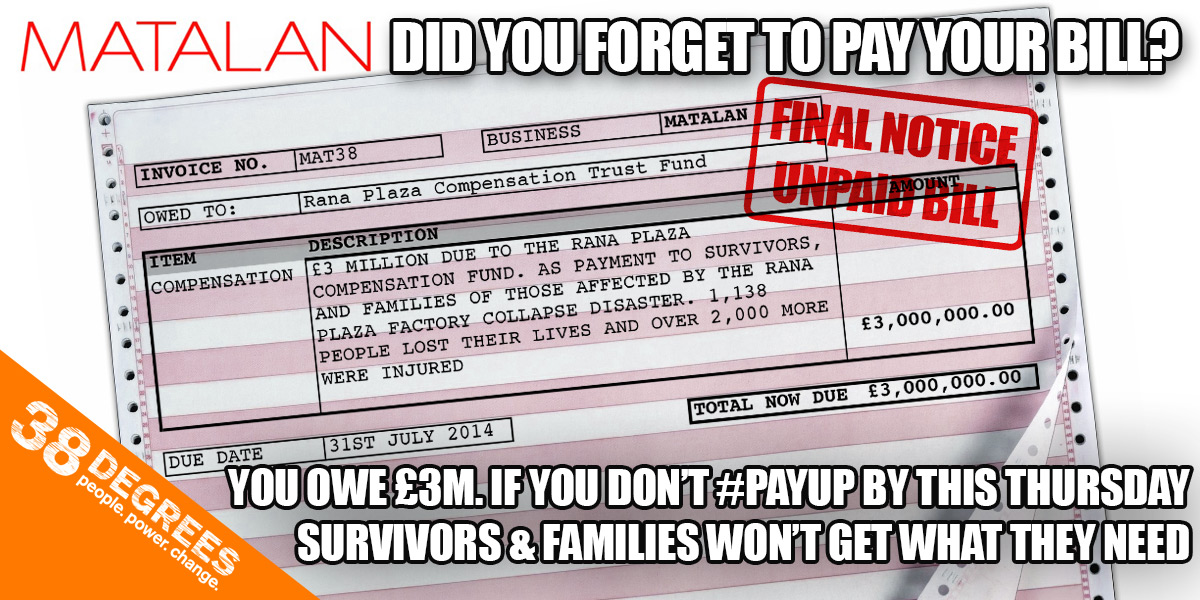 In the aftermath of the disaster, big retailers whose clothes were made in Rana Plaza came under pressure to compensate the survivors and the families of those who died. An official Fund took contributions from companies including Asda, Debenhams, H&M and Primark.

But major British retailer Matalan haven’t contributed at all.  They have until Thursday to pay their fair share, or some survivors won’t get the money they’re owed. So let’s ramp up the pressure.

Matalan care about their image. The last thing they’ll want is tens of thousands of their potential customers signing a petition which spotlights their refusal to pay. So let’s do just that. Click here to sign the petition now.

Matalan owe just £3m – small change for multi-millionaire owners the Hargreaves family, most of whom live in tax-haven Monaco.  The company made sales of £1.1bn in 2013, and spent over £13m on advertising alone.

They say they’ve donated to charity instead. But charity isn’t the same as compensation for loss of earnings to rebuild shattered lives. Let’s hammer that point home.

38 Degrees members have taken on big companies before – and won. A month ago, tens of thousands of tweets got Barclays Bank to rule out investing in a dirty coal port at the heart of the Great Barrier Reef. And earlier in the year, we got eBay to stop selling banned bee-killer pesticides.

Just like Barclays and eBay, Matalan are sensitive to what the public thinks. They do their best to look like a family-friendly, respectable British company. So not paying their share of compensation is embarrassing – and they won’t want tens of thousands of their potential customers signing a petition about it.

We’ve got four days to pile public pressure on Matalan. The bigger we make this, the faster they’ll respond.

Can you sign the petition now? The staff team are trying to get Matalan or their PR company to meet 38 Degrees members and take the petition. If they refuse, we could just stand outside their HQ until they meet us.

Either way, the petition has to be huge if it’s going to make an impact. Can you sign the petition to Matalan now? Click here.