Save our GP surgeries 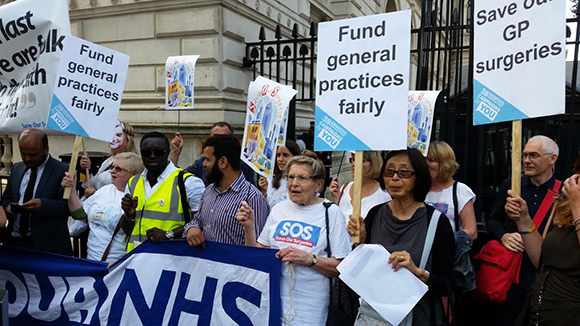 Yesterday 38 Degrees members, GPs, MPs and NHS campaigners went to 10 Downing St to hand in a petition to save GP Surgeries.

Sarah Williams, a GP from Hackney in London has started a petition on Campaigns by You calling for the government to reverse their decision to cut vital funding to inner city and rural GP surgeries. Very good local practices may be forced to close – leaving hundreds or thousands of patients without a GP.

There has also been exciting news recently as lawyers Leigh Day are planning to judicially review the government’s decision to remove this funding from GP practices. There should be more news on this in the next 2 weeks.  As many of you will know it was Leigh Day who won a judicial review against Jeremy Hunt’s decision to close Lewisham Hospital!

Thanks again for your support”

Check out more pictures from the day here: