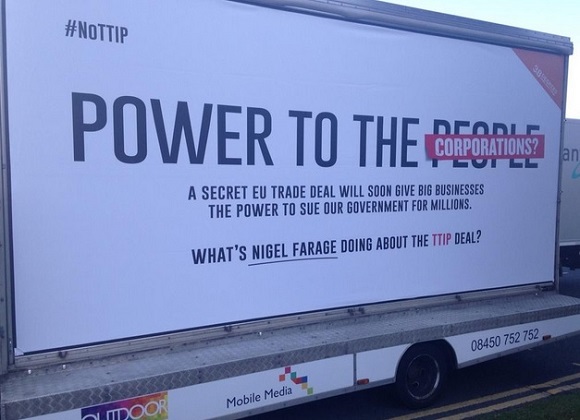 If we’re going to stop TTIP – the terrifying trade deal between the US and the EU – we need to prove to every politician that ordinary people won’t accept it. That’s why 38 Degrees members were at UKIP’s party conference in Doncaster yesterday to ask them to speak out against TTIP.

Whatever you think of UKIP, they have 24 members of the European Parliament. They’ll eventually vote on TTIP. And they’d been unclear on their position, until on Friday, their Health spokesperson said they would vote for an exemption for the NHS. At Doncaster racecourse, 38 Degrees members were handing out leaflets asking the party to come out against the deal as a whole.

Here’s what what some 38 Degrees members said about their morning leafleting:

“Personally it felt good to be part of a real turnout of campaigners, too often when I’m lobbying or campaigning I find myself on my own or with maybe just one or two people & I get the feeling that nobody around here really cares, but the size of this group was really good.”

“Had a good time this morning. Went to raise awareness about TTIP at the UKIP party conference. Gave out lots of leaflets.” Judith

“It was an interesting meeting the UKIP delegates on their way to conference this morning. Nearly all believed that control of the NHS should not be compromised by a translantic trade agreement”