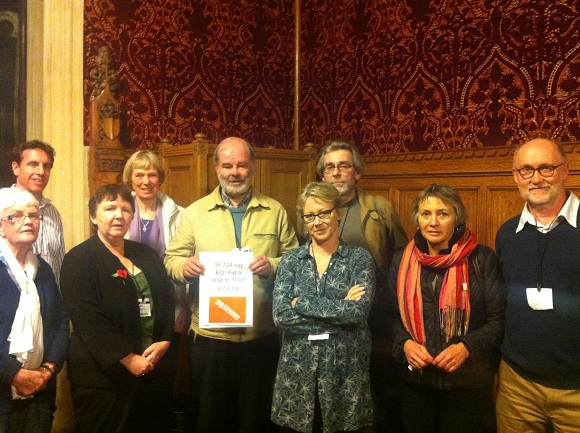 Last night a group of 38 Degrees members from Enfield met one of their MEPs to quiz him on TTIP. TTIP is the EU-US trade deal that could make privatisation of public services irreversible – and allow corporations like McDonald’s to sue our government.

The meeting with Charles Tannock, a Conservative,  was organised by their local MP David Burrowes. He hadn’t been able to give them all the answers on TTIP. It’s great that he got in touch with their MEP so that they had a chance to put their views across to someone who not only represents them, but who gets a vote on the deal.

Charles said that both the Conservative party in the UK, and the group they are a part of in the EU – stand “broadly in favour” of TTIP. The group pitched some great questions about transparency, the effects of the NAFTA trade deal, food standards and lots more. 38 Degrees members said they weren’t against trade as such – but they were against a trade deal that would have the negative effects TTIP would. It was also pointed out that we already had a strong trade relationship with the USA – so why is TTIP needed?

Charles spoke strongly in favour of free trade and  freer economies. He wasn’t concerned that he, admittedly, didn’t know much about the deal. He said there was secrecy around TTIP because the deal hasn’t been negotiated yet. He believes he shouldn’t know any more information “because it hasn’t been revealed” – which seemed a pretty strange line to take for an MEP who’ll vote on the deal!

Charles left saying he would do more research into some aspects of TTIP. We certainly shocked him with some of the downsides of the deal that he’d heard nothing about. This can’t just be the case for this MEP – so it’s really important we try to meet with as many of them as possible! Could you make an appointment with your MEP?