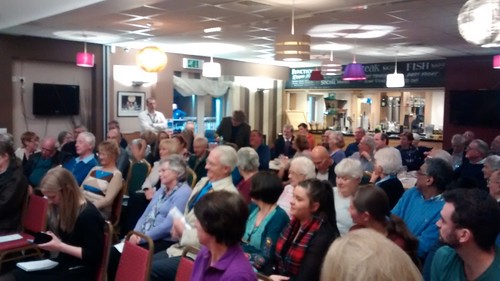 Despite the TV Debates Solihull Keep our NHS Public group organised a very successful NHS hustings on Thursday at the 7:00pm West Warwick Sports Club. The Solihull event was packed.  Lorely Burt, the sitting MP,  has a wafer thin majority The candidates attending this event included:

We had asked 38 Degrees members to meet up outside the venue half an hour before to get to know each other and decide what questions to ask. This worked very well, and we got to know a lot more members.

According  to member David P:

“By my count 78 people at the hustings; we got in three questions and another in the closing part. Two first-time voters, a handful under fifty and most were senior citizens.

The candidates certainly heard our concerns over privatisation, concerns over the NHS’s future (including Solihull Hospital), poor management and we got promises.

Lisa, a 38 Degrees member,  had the best question of  night.  Not the exact words: ‘Along with others, I raised £280,000 twenty years ago for Solihull Hospital, did I waste my time?’”

According to Terry Mandrell, a long standing 38 Degrees member and from Solihull Keep our NHS Public group, it was:

“A very successful evening in terms of attendance but far too many critical questions remained unanswered, especially in terms of NHS finance.

Part of the problem that we face with the general public is that they really don’t know what is happening in terms of the squeeze on the NHS budget under the Coalition or , the steady and unrelenting march of privatisation. None of these  were  really discussed  last night. Perhaps, we might do better on these on 8th  April at our Meriden hustings. “