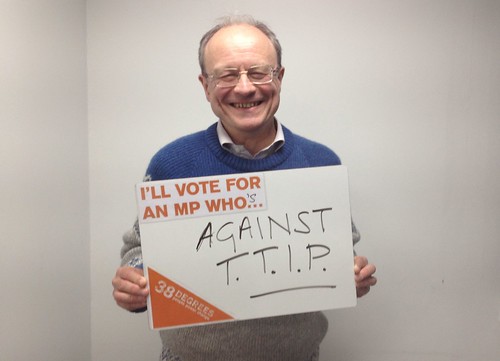 Confidential talks in New York this week could have a profound impact on our lives but they meet near-total silence in the election campaign. These are the latest negotiations for a treaty between the European Union and the United States, to be called the Transatlantic Trade and Investment Partnership or TTIP.

However, the talks were marked last Saturday by a Global Day of Action against trade agreements, including five events in Brighton and Hove. On Wednesday, April 15th 38 Degrees organised a meeting with election candidates from five parties. John Hilary, director of War on Want, was guest speaker and Greg Hadfield, editorial director of the B&H Independent, took the chair.

Why does TTIP matter to you? Here are five good reasons to fear it.

1. A threat to democracy

If agreed, TTIP would undermine democratic decision-making. Its main purpose is to align rules affecting big business on both sides of the Atlantic, supplanting existing laws with arrangements that have never been discussed or voted on by the other side.
TTIP would enable US corporations to sue European governments, including Britain, in secret commercial tribunals over decisions that could affect their profits. Under similar deals Philip Morris, maker of Marlboro cigarettes, is suing Australia for compensation over plans to put cigarettes in plain packets. The French company Veolia, which runs recycling plants in Brighton and Hove, is suing Egypt over a waste management contract in Alexandria. It wants its fees to be raised after an increase in the minimum wage.
The EU also proposes a permanent body to submit new laws for comment – and possible veto – by multinational corporations on both sides of the Atlantic before they are made public.

TTIP would entrench new markets in public services such as health and education, leading to greater liberalisation and privatisation. It could make it very difficult to bring these services – as well as energy and water – back under public control or renationalise them.

The US government, pushed by agribusiness firms, wants to force EU food safety and animal rights rules down to American levels, for example by ending restrictions on genetically modified organisms (GMOs).
On safety grounds the EU bans 82 pesticides that are allowed in the US, where maximum residues on food are up to 2,000 times what they are in Europe. The US has no federal law on welfare of farm animals until the last day of their lives. All these European precautions could go, bringing back battery hens and letting cattle be routinely fed with hormones and antibiotics, and food to be irradiated.

Under TTIP environmental regulations would be harmonised, bringing them down towards US levels. This could allow a fracking boom to go unchecked. US oil companies might sue governments that legislate to leave fossil fuels in the ground.

The worst is that we are not being told what is proposed on our behalf.
The US business lobby in Brussels was instrumental in persuading the EU to go for TTIP. Multinationals were consulted in detail before negotiations were announced, and this is reflected in negotiating texts that have been leaked.
The public has been shut out. There is no access to texts – even for MPs – so most of what we know comes from leaks. Even Members of the European Parliament, which will vote on ratifying TTIP, must go through a humiliating procedure before they can see the texts, and they may not take notes or tell anyone what they have read.
After prolonged public pressure the European Ombudsman finally instructed the European Commission to be more transparent. But US negotiators still refuse to allow any actual texts from either side to be released.