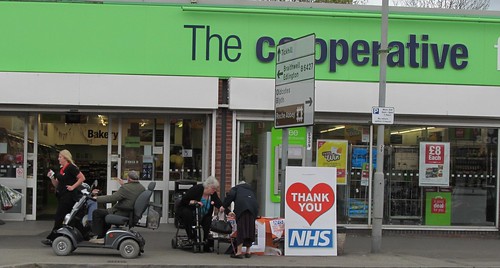 Maltby is a former mining town and civil parish of 16,856 inhabitants (2011) in the Rother Valley parliamentary constituency. It is located about 6 miles east of Rotherham town centre and 10 miles north-east of Sheffield city centre. For the record: Maltby is mentioned in the Domesday Book as “by-malt”, and was for centuries a very small village with the benefits of a fairly large stream nearby and very rich land for farming available.

Although It is the largest town in the Rother Valley constituency 38 Degrees has relatively presence there. So some members decided to sow some seeds, and to set up stall there for the NHS Day of action last Saturday.

Judith Reynolds, who organised the petition, says “The NHS has been there ever since I was born. All members of my family have used at one time or another. It worries me that it may be sold off to large private insurance companies. I want it to remain as the service that is there for everyone, irrespective of ability to pay. I do not want an American style system that does not cover the entire population. I think we are so used to the NHS being there that we take it for granted; to lose it would be disastrous. ” 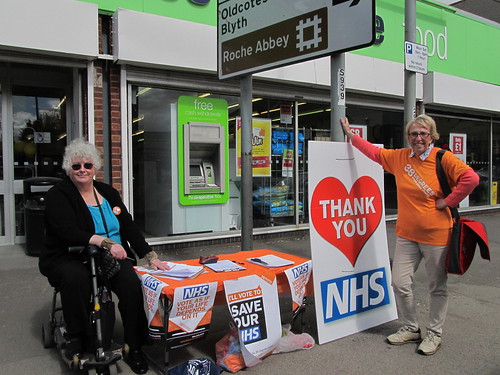 The above photo is  from last Saturday. Judith Reynolds is on the right and Patricia Williams is the lady in the wheelchair. The third campaigner is taking the photo. Together they  collected 132 signatures in two hours. “Quite a few cars peeped their support when they saw our large poster.”

Everyone who signed was very keen that the NHS is not privatised any further. Some people who signed work in the NHS, they said it is very stretched and something needs to be done to save it.

One lady who is on dialysis said that she would not be able to afford her treatment if the NHS went over to a private medical insurance system. Lots of useful connections were made.