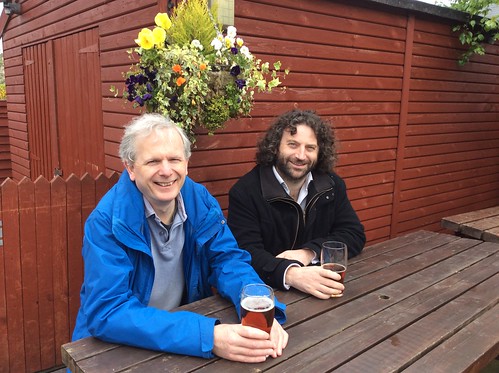 “Our leaflet is an independent comparison of which policies the candidates support in seven key topic areas. We want the Cambridge electorate to vote with their eyes open!” – Dr Chris Forman (pictured on right), 38 Degrees member from Cambridge.

In response to the nation-wide call from 38 Degrees to host “election meet-ups” back in February I signed up to host the one in Cambridge and then waited in the chosen pub with a 38 Degrees balloon to see who turned up! One by one five other local 38 Degrees members arrived and over a pint we discussed what we could do together to bring democracy back to life! After much discussion we settled on the idea of a party neutral leaflet summarising the positions of the candidates themselves on key issues (as opposed to the parties) that we would hand out to as many people as possible in the days before the election. 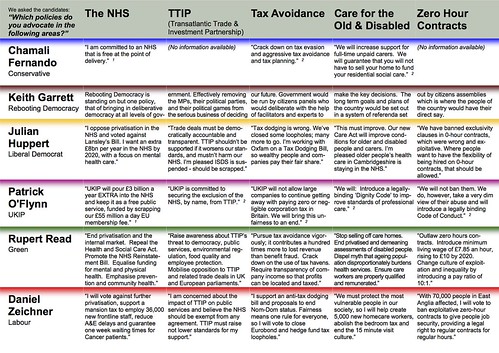 The topics we put to the candidates were identified in the nationwide survey of 140,000 members of 38 Degrees. They include the NHS, TTIP, tax dodging and climate change. We also decided to include questions on care for the elderly and disabled and zero hours contracts as we felt that these were important issues as well.

38 Degrees member Patrick O’Donohoe who was part of the team and did all the typesetting work said: “It was hard work at first to contact the candidates but perseverance paid off! When they finally clicked what was going on, the response from the candidates was good. The biggest challenge was figuring out how to fit in all the information candidates sent us! We tried really hard not to modify their responses but slight tweaks were inevitable due to space constraints. Our impartiality was critical to the value of the leaflet.”

With only 30 words per topic the responses really highlight the candidates personal priorities. Sadly two of the six candidates didn’t respond, which was also part of the test! The two who didn’t respond were Patrick O’Flynn (UKIP) and Chamali Fernando (Conservatives) so the team pieced together responses from the manifestos and websites for these two candidates.

“Including the party positions for the non-responsive candidates was better than nothing!” said member Dr Anne McConville. “We did research into their positions so that others don’t have to. We make it clear in the leaflet what our sources are and provide links to further independent sources of information for all the issues and candidates.”

The last three members of the team, David Knipe, Suze Olfield and Gaynor Meers are also very proud of the leaflet. David’s message to other people is: “If issues that matter to you aren’t on the leaflet, then consider getting involved with 38 Degrees! You will find other people who share your concerns.”

We have printed 1,000 copies of the leaflets which we will be handing out in the city centre between now and the election. You can download the leaflet here. Please feel free to print off your own copies to share with family and friends in the Cambridge area. If you would like to help out distributing the 1,000 leaflets we have printed please join in the conversation with other Cambridge 38 Degrees members on the election hub.