Broxtowe delivers 6,860 signatures on May Day

Our 38 Degrees ambulance stopped off at Beeston, part of the marginal Borough of Broxtowe, today, May Day.

There were more than 25  people to greet us. By no means  all of them can be seen in the photo below: 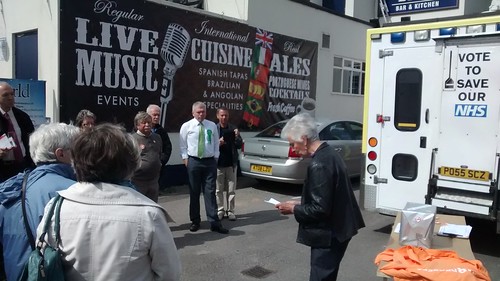 The person speaking is Konnie Lloyd,  one of the many people who have worked over  6 months to collect signatures from people living in Broxtowe, who are deeply opposed to the Transatlantic Trade and Investment Partnership (TTIP) deal  being negotiated between the US and the EU Commission. that groups had already collected more than 5,000 petitions. which are  in the box she is holding, see below: 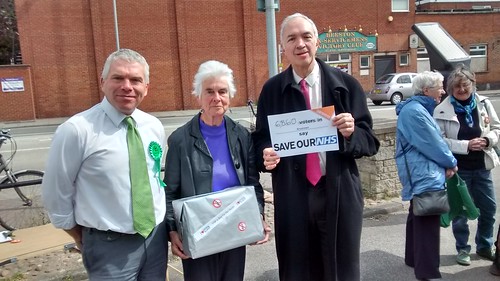 She called upon whoever is elected as an MP to  to know that Broxtowe respects democracy, loves the NHS, and wants them to oppose TTIP and the damage it will do.

In the event two of the candidates turned up. The David Kirwan, the Green Party candidate is to Konnie’s left and Nick Palmer, the  Labour Party candidate, is to her right. Nick Palmer said that the good thing about 38 Degrees is that it focuses upon the issues, and forces politicians to take notice, and yet it steers clear of party politics.

One noticeable absentee was Anna Soubry, although to be fair the candidates didn’t receive much notice.
Adding together the two petitions we have so far collected  at least 6,860 signatures.

Whoever wins and whatever coalition is formed 38 Degrees will continue to campaign around the issues that we all care so deeply about. And we will also discuss what new campaigns we could open up.
In addition to campaigning we will also be setting up a local group. Do come along and join in.

The upstairs room will be  booked. Coffee, tea and soft drinks will be paid for.