On the afternoon of Saturday 2 May, just 5 days before the election, a group of 38 Degrees members from Sheffield Hallam presented their local MP candidates with the names of the 2,000+ people who have signed the ‘Save our NHS’ petition. 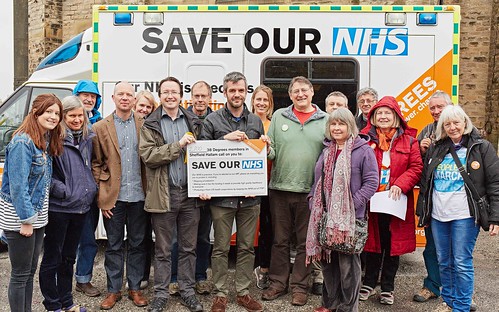 The 2,000+ names on the petition also represent the thousands of conversations that 38 Degrees members from the constituency of Sheffield Hallam have had with other voters about the importance of ensuring that whoever is elected as their next MP commits to protect our NHS. To ensure that it is protected from funding freezes, privatisation and the dodgy trade deal TTIP.

All MP candidates standing in Sheffield Hallam were invited to attend a short meeting with 38 Degrees members to receive their copy of the petition and to talk about what they would do to protect the NHS, if elected. 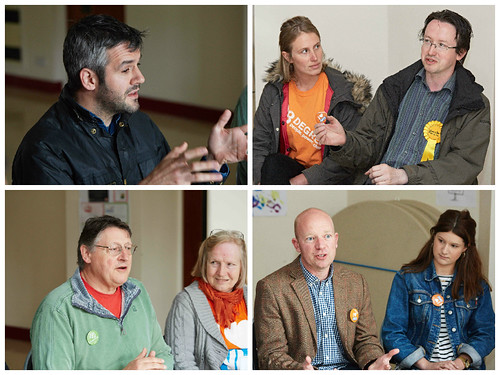 Oliver Coppard (Labour), Peter Garbutt (Greens) and Carlton Reeve (Independent) all accepted the invitation. The Liberal Democrats sent Joe Otten (candidate for Sheffield Central) to represent Nick Clegg. Ian Walker (Conservative candidate) declined the invite to attend and the other candidates did not respond to the invitation. 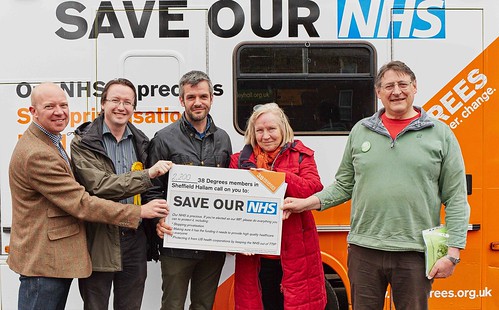 Local 38 Degrees member Shirley Cameron (in the red jacket in photo above), who has been incredibly active on the ‘Save our NHS’ campaign handed over the certificate to the MP candidates. In turn she reminded each of them that cutting NHS funding, or handing it over to private companies, is a huge turn off for local voters.

As Nick Clegg, the Liberal Democrat candidate for Sheffield Hallam had sent a representative in his place to the petition handover, local members decided that they would personally deliver the petition to him. Read the blog about the surprise visit to Nick Clegg here.