Scottish election survey: the results are in!

The results are in! 15,000 38 Degrees members took part, and it’s inspiring to see how many see the Scottish election as important – 97% of the members who took part in the survey are planning on voting.

Here are the results in full (click on any of the images below to see them in a larger size):

38 Degrees members ranked how interested they were in the 2016 Scottish election, and how high a priority they thought it should be for 38 Degrees: 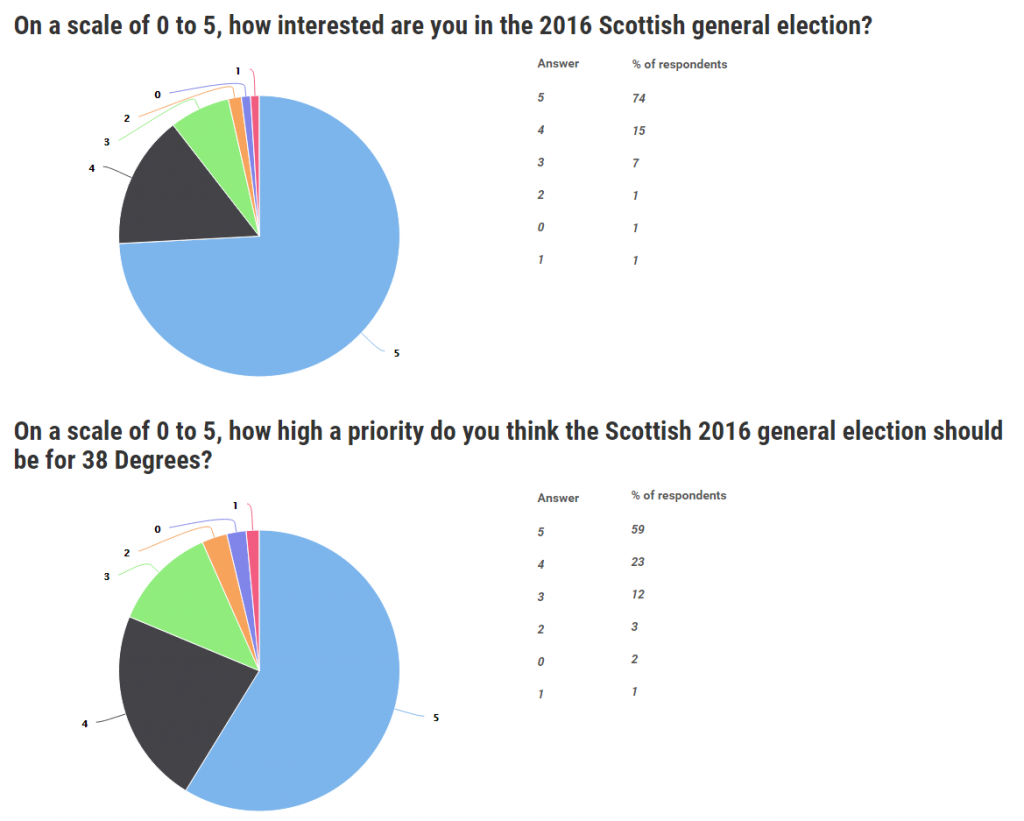 38 Degrees members then shared what they thought about the election, and the choices they could make:

Next, 38 Degrees members decided what issues should be the top priority during the Scottish election. Here’s the top three: 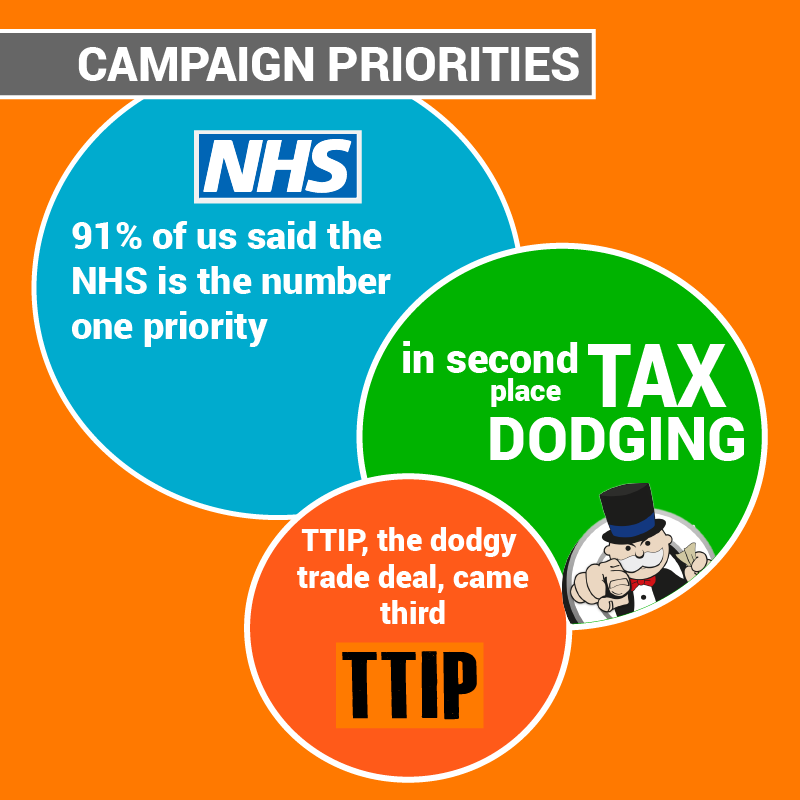 And here are all the issues 38 Degrees members voted on, ranked in order of how high a priority they are: 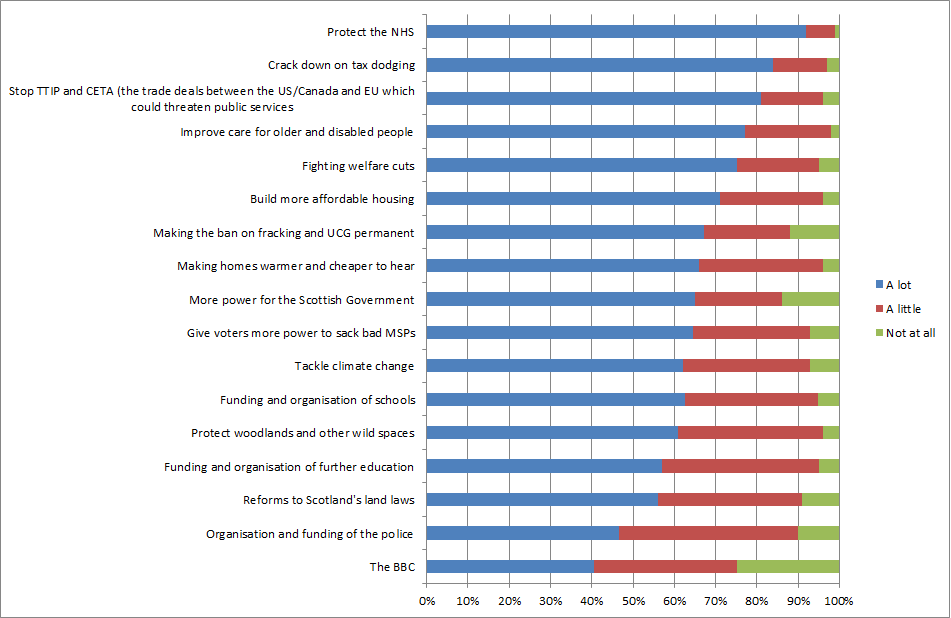 As well as lots of issues to campaign on during the election, there are a lot of tactics 38 Degrees members could use. So members ranked the tactics to help decide what we do together during the Scottish election. Here’s the top three: 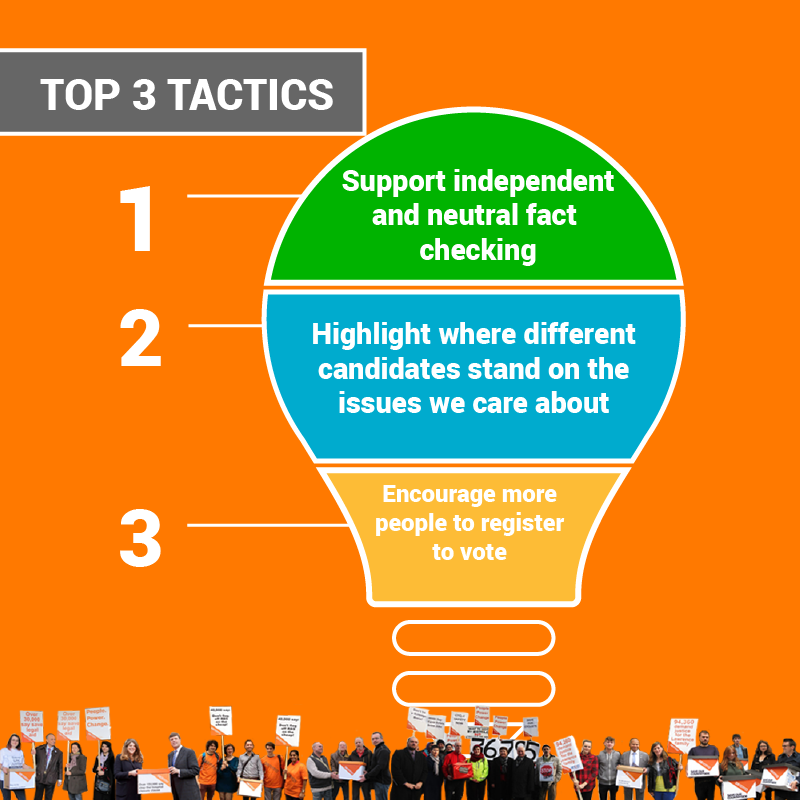 And here are the tactics ranked in full: 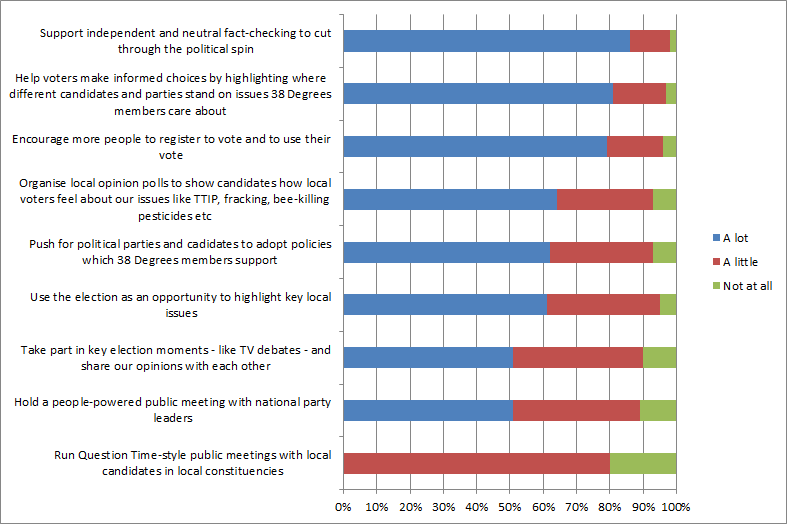 Next 38 Degrees members decided what we should do together to make sure as many people voted as possible.

The next couple of questions were around how many 38 Degrees members were planning on voting, and whether or not we’d all made up our minds yet about who to vote for! 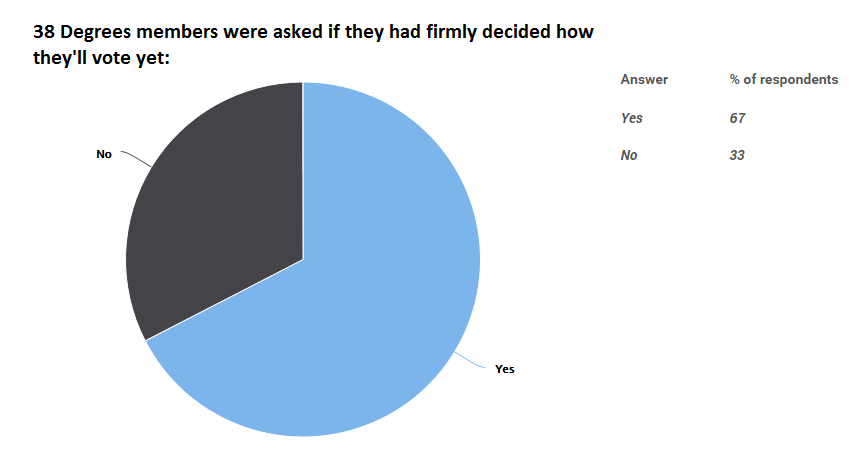 38 Degrees members are making a plan together about how we should campaign, what issues matter, and why this election is so important. Here are just a few comments from 38 Degrees members in Scotland about their thoughts on the 2016 Scottish election:

“It’s vital that the information given to voters includes what each party has *actually done* and not just what they say they intend to.” – Fiona, Aberdeen

“Voter apathy is a big issue, voters need to feel like their vote will actually make a difference. Obvious spin and dirty tricks should be highlighted wherever it happens, and it should not just be allowed to quietly fade away after it’s been highlighted.” – Mark, Inverclyde

“We have a real chance to make history and change politics in this country, or at least get the ball rolling on greater representation of constituents .” – Amanda, Glasgow

“Personally I think its time the people were reminded that this government is ours and that we need to stand up and be counted to remind the politicians that they are supposed to work for us not the other way around!” – Nicola, Bannockburn

Are you excited for the 2016 Scottish election? Share your thoughts in the comments section below: