We did it! Animal welfare codes are not being scrapped

This is a guest post from Cas Smith, a 38 Degrees member who started the campaign to protect our animal welfare codes.

We won! The government are backing down on their plans to water down animal protection rules.

My name’s Cas Smith, a charity worker from East Sussex. Two weeks ago I found out that the government was planning to give factory farmers the power to rewrite the rules on factory farming. It was like asking children to mark their own homework. If they got their way, millions of British farm animals would be left with no one to look out for them.

It felt absurd, if not downright cruel – so I knew I had to do something. I heard that 38 Degrees helped people like me and you to start and win petitions. So I went on their site, clicked ‘Start a campaign’ and followed the easy steps to write a petition.

If you also have an issue that’s close to your heart, you can start your own campaign here: https://secure.38degrees.org.uk/start-a-cby

I was astonished when the petition took off so quickly. Watching it hit 100,000 was something I’ll never forget. That was the moment I really felt we might be in with a chance of getting the government to back down and give farm animals the protections they deserve. The strength we had as a group was massively powerful, and I wanted to use it to work with other organisations to get the government to back down.

As it happens, we didn’t need to. The farming ministry announced last week that they’d had a rethink. “In light of views raised,” they said, they’ve decided to shelve the plans. We hit them much harder than they expected with a wave of people-powered opposition. We helped them realise they’d just got it wrong. 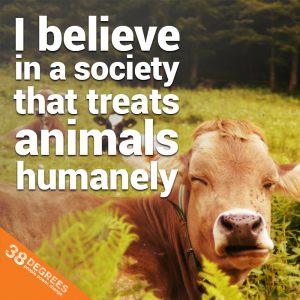 Thank you to each and every one of you for speaking up on behalf of the animals who don’t have a voice. To say I am stunned and elated is an underestimation. Together, we’ve helped animals all around the country lead better lives.

If you’re relieved by this news too, please can you share it with your friends on Facebook?
https://secure.38degrees.org.uk/animals-win-fb-share

You people are truly an avalanche!

PS: I started my petition on the 38 Degrees Campaigns By You platform. If you’d like to make things a little better alongside thousands of like-minded people, you can start your own campaign here: https://secure.38degrees.org.uk/start-a-cby