The government is backing down on plans to sell off the Land Registry!

Last week 38 Degrees members emailed our MPs in our thousands. We asked them to attend a debate on the Land Registry and speak out against government plans to privatise the profitable public service.

MPs from all sides lined up to criticise the plans. And they mentioned the 38 Degrees petition and our people powered investigation in the debate.The minister in charge said he’d heard the criticisms “loud and clear” and kicked the sell-off into the long grass.

It’s a breakthrough moment in a hard fought campaign. Here’s what 38 Degrees members did together: 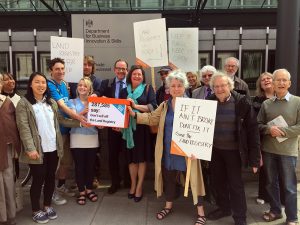 These are turbulent times in politics, and no one can say for certain when a new government will be in place, and who will be leading it. But in all the uncertainty, there’s one thing we know for sure: if a new government dusts off the short-sighted plans to privatise the Land Registry, there’s hundreds of thousands of us ready to stop them.