George Osborne To Edit The Evening Standard : What’s Being Said

His plans are already causing a stink from MPs and journalists – they don’t think it’s right for him to be an MP, and a huge newspaper editor.

(Ian Katz is the editor of BBC Newsnight) 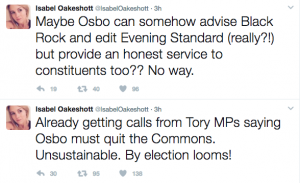