Together, hundreds of thousands of us voted to decide what 38 Degrees should do during this general election. One of the main priorities that came out of the surveys was to get as many people to vote as possible, and that meant trying to get those who don’t normally vote, to vote. Which, in turn, meant getting them registered in the first place. 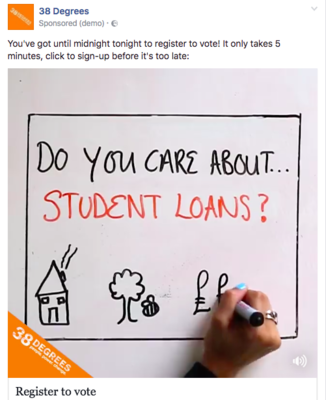 The groups least likely to be register were people under 30, who rent their homes, or who are students. So 38 Degrees members crowdfunded a huge social media campaign to target them.
Donations from 38 Degrees members powered a sophisticated, targeted online ad campaign. Our adverts were shown online over 4 million times, getting our message of the urgency of registering to vote in front of the people who most needed to hear it. Tens of thousands of people clicked through to the government’s register to vote site immediately after seeing our ads. 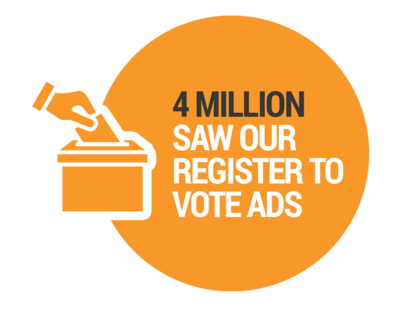 38 Degrees members generosity and commitment made a huge contribution to efforts to get young people registered. A wide range of other organisations, government agencies, and celebrities also joined in. And the results from all the work are impressive. In the final 24 hours – when our ads were running at full pelt – over 250,000 young people registered. Your donations helped encourage those people to register – congratulations on some money well spent.