Victory: Broomfield’s A&E in Essex has been saved!

This is fantastic news! After months and months of hard work, a group of 38 Degrees campaigners in Essex have saved their hospital’s Accident & Emergency. They proved to NHS bosses that the plan to downgrade Broomfield A&E was unpopular and dangerous, and now the plan has been scrapped.

Here’s how they did it:

November 2016: 38 Degrees member Andy from Chelmsford sprung into action when he heard about the threat to his local A&E at Broomfield hospital. He couldn’t accept that people in a life-threatening emergency would be forced to take a longer, riskier drive to another hospital. So he started a petition on the 38 Degrees website and set up a Facebook page.

December 2016: Andy’s petition had gathered thousands of supporters already! Many of them wanted to roll up their sleeves too, so together they set up stalls in their town centre to get even more signatures.

January to March 2017: Andy and the other campaigners organised a march in Chelmsford for hundreds of people. Lots of other people emailed the NHS bosses demanding they scrap their plans and they delivered the 22,000-strong petition.

April to June 2017: They organised lots more petition stalls and public meetings, including a hustings to quiz council candidates on what they’d do to save the A&E. The campaign kept hitting the front pages of local newspapers, and loads of people wrote letters to the Editor to share why the A&E matters to them.

Last Friday: NHS bosses announce that the A&E will be saved! NHS boss Claire Panniker explains that it was the “significant concerns” of so many people that made it happen – that’s the 30,000 people who supported Andy’s campaign. 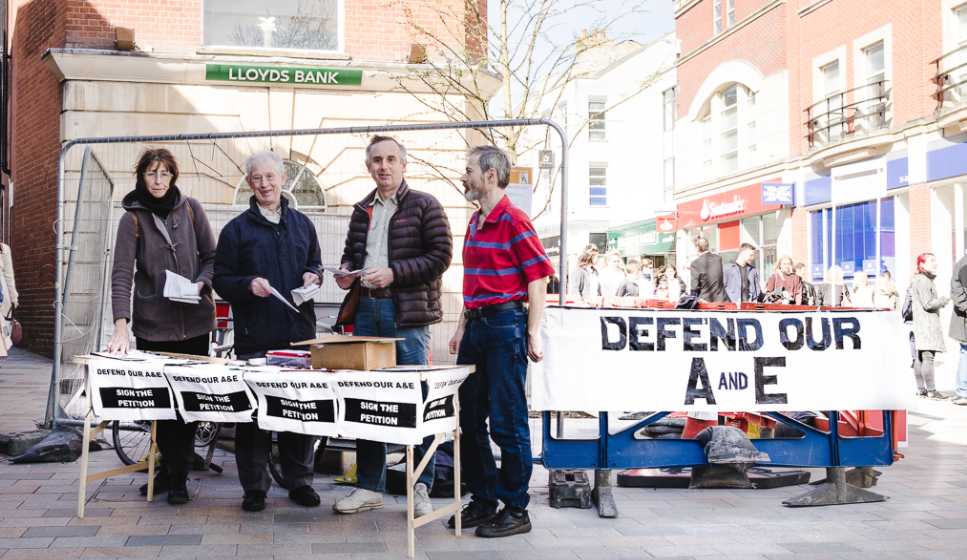 Our NHS is straining from underfunding. From Durham to Cornwall, there are so many hospitals, A&Es, GP surgeries and maternity units at threat right now. It can be easy to feel that it’s impossible to save local NHS services.

But Andy’s story shows that when 38 Degrees members work together we can achieve wonderful things. Right now dozens of other people up and down the country – people who are just as enthusiastic as Andy – are fighting their own battles to protect the NHS services that matter to them.

Together, we can turn Andy’s success story into a sea of change and make sure the NHS is always there for those who need it.

Thank you for all you do to protect our NHS.

PS: Andy’s first step to saving his local A&E was to launch a petition on the 38 Degrees website. It’s simple to do and we’ll help you every step of the way. If your local NHS is under threat, or there’s another issue close to your heart, just click here to get your petition started today.