Our NHS shouldn’t be up for negotiation

The NHS as we know it is at risk. A group of lobbyists have published a plan for a US-UK trade deal. [1] They want to let American healthcare companies make money off UK patients when we’re sick, vulnerable and in need of care. [2]

The lobbyists have spent the past few weeks rubbing shoulders with politicians, trying to open the door to US style healthcare in the UK. [3] It’s now clear – the only thing coming between an NHS which is there for all of us and US companies running NHS services for profit, is people like you.

The lobbyists know their plans might be controversial. [4] But so far, they’ve gone under the radar. Together, we need to show the government that voters won’t allow the NHS to be put up for negotiation in future trade deals.

A huge public petition would show the government exactly what voters think of these plans. If hundreds of thousands of us ram the message home – together we can protect our NHS and stop the lobbyists’ plan in its tracks.

Will you sign the petition now – and tell the government that our NHS shouldn’t be up for negotiation?

When done well, trade deals can be good for the UK. They can help create jobs and build opportunities for all of us. But this plan would put our health service at risk. [5]

Our NHS was founded on the idea of fairness. That we all deserve safe healthcare, no matter who we are, where we’re from or how much money we make. [6] It means that every single one of us knows that when a child is sick with fever, or a relative needs a hip operation – we get the care we need. And we don’t need to worry about whether we can afford it.

It might feel like the public can’t affect trade deals. That they’re done behind closed doors between politicians and diplomats. But together, 38 Degrees has proven that we can drag them out into the open. When the government wanted to give themselves the power to change laws to complete trade deals in secret, over 500,000 38 Degrees-ers like you piled in – and in July we won! [7]

NOTES:
[1] The report was developed in consultation with other think tanks in both the US and UK who have proposed other trade policies adopted by Donald Trump. The editor and one of the authors have also consulted Liam Fox, the UK’s Secretary of State for Trade, and other ministers:
The Times: Let American firms run hospitals, urges free trade group: (paywall)
https://www.thetimes.co.uk/article/f66b7626-bb92-11e8-8fbe-1261885931e2
[2] The Guardian: Rightwing thinktanks unveil radical plan for US-UK Brexit trade deal:
https://www.theguardian.com/politics/2018/sep/18/rightwing-thinktanks-unveil-radical-plan-for-us-uk-brexit-trade-deal-nhs
The full text of the report is here:
Cato Institute: The Ideal US-UK Free Trade Agreement:
https://object.cato.org/sites/cato.org/files/pubs/wtpapers/ideal-us-uk-free-trade-agreement-update.pdf
Here’s a short explainer about how the American healthcare system works:
BBC: How does US healthcare work?:
https://www.bbc.co.uk/newsbeat/article/10067521/how-does-us-healthcare-work
[3] The Conservative Party conference – an annual gathering where MPs, their staff and other people working in politics for the Conservative Party took place a few weeks ago. The organisations that launched the blueprint held an event to promote their trade blueprint on Sunday:
Conservative Party Conference: Fringe events:
https://conservativepartyconference.com/searchfringeevents 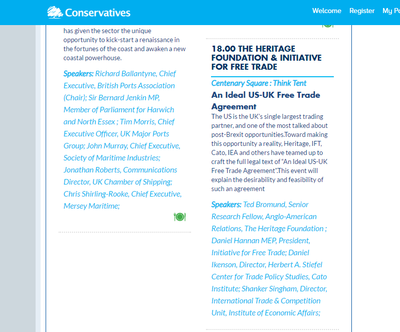 [4] As the lobbyists’ report states, “As for other services areas, health services are an area where both sides would benefit from openness to foreign competition, although we recognize any changes to existing regulations will be extremely controversial.” (p. 228):
Cato Institute: The Ideal US-UK Free Trade Agreement:
https://object.cato.org/sites/cato.org/files/pubs/wtpapers/ideal-us-uk-free-trade-agreement-update.pdf
[5] See note [1] and [2]
[6] NHS: Principles and values that guide the NHS:
https://www.nhs.uk/using-the-nhs/about-the-nhs/principles-and-values/
See note [1] and [2]
[7] 38 Degrees: Trade victory:
https://home.38degrees.org.uk/2018/07/18/trade-victory/