Where should I set up my petition?

If you are thinking about setting up a petition you might be wondering which website you should use. Here are a few reasons why 38 Degrees is the best place to go…

🧡 Our values drive us. Unlike for-profit petition websites (like change.org and others), 38 Degrees is a not-for-profit organisation. It means we’re driven solely by a passion to make positive change, rather than thinking about the bottom line.

🧡 We’re totally independent. We’re funded by small donations from thousands of people like you, and not beholden to big donors, shareholders, or the government.

🧡 We do much more than run petitions, we run campaigns. That means we have a team of expert campaigners who can help you to share your petition and develop tactics, like emailing MPs or organising events, so that your campaign is as successful as possible. We will keep campaigning until we know the message is heard.

🧡 We don’t wait for a petition to get to 100,000 signatures to make an impact. Many MPs have taken forward our petitions and campaigns to get debated in the House of Commons, and won. The government says that they will only accept petitions from the parliament website, but that isn’t true. And right now over 88% of petitions set up on the parliament website have been formally rejected, and 0% have been debated. (Source: https://petition.parliament.uk/petitions, on 19th June 2020)

What’s the difference between other petition websites?

Here is what 38 Degrees can offer to campaigns:* 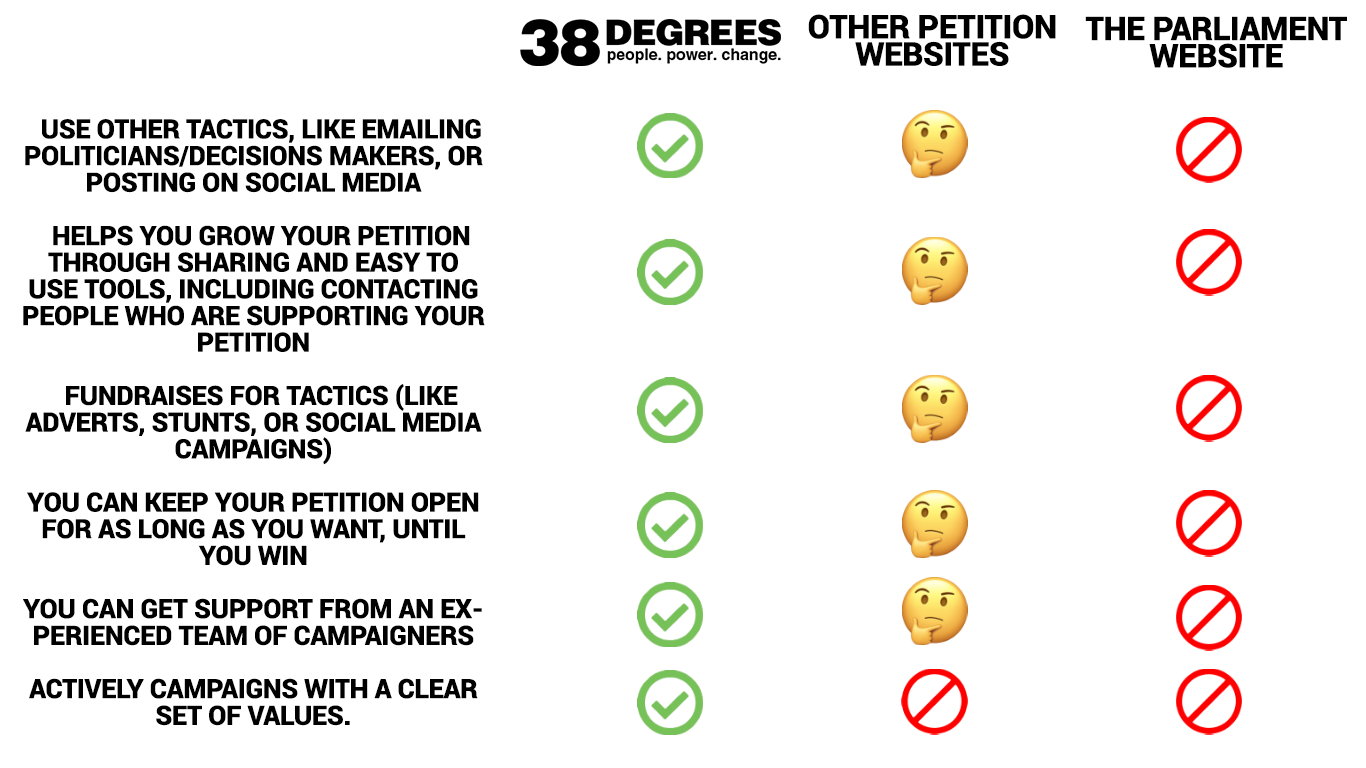 *We’re a small team, which means we can’t do things like email MPs and post on our social media for every single petition, but we do look at all of the petitions that are set up on the 38 Degrees website, and think carefully about how we might be able to help.

But I thought only petitions set up on the parliament website were listened to?

Wrong. Although the official parliament petition website promises responses and debates once your petition has hit a certain number of signatures, it’s not as simple as that:

1) Getting 100,000 signatures on a petition on the official parliament website doesn’t guarantee a debate – it just means that the committee of MPs who consider holding a debate have a look at it. Even if a debate does go ahead, it has no decision making power or voting function – and generally is only attended by supporting MPs so, in reality, often has little impact.

2) Unlike 38 Degrees – the parliament website isn’t set up to help you grow support for your campaign or petition. It isn’t designed to empower you, others or your campaign. You’re not prompted to share your parliament petition on social media, and you cannot contact anyone who signed your petition asking them to keep the pressure on. We all know that sometimes it takes more than a petition to win a campaign – 38 Degrees has all the tools required to keep going until we make change.

3) The parliament website closes down all petitions when they have been live for 6 months. They also reset all petitions after an election. It means if you can’t hit 100,000 in 6 months your hard work will be wiped out. 38 Degrees petitions have no time limit. You can run your campaign for years and years if that’s what it takes.

4) There are lots of ways to get an issue debated by politicians, and 38 Degrees knows how. Some of our biggest campaigns have led to debates; for example Seni’s Law, a campaign to restrict the use of force on mental health patients: https://you.38degrees.org.uk/petitions/we-back-seni-s-law

Campaigns that push for change are supposed to make people in power a bit uncomfortable! Petitions are an amazing tool for agitating people in power and putting continued public pressure on them. That means using the government’s own tools to do this, unsurprisingly doesn’t often end up with the impact we’d want.

Why choose 38 Degrees? What about other petition platforms?

38 Degrees is a not-for-profit. We only focus on campaigns within the UK, and don’t run campaigns in order to make money, unlike other petition platforms which work for-profit.

That means we keep impact top of the agenda. For example, we often fundraiser for other organisations doing incredible work on a variety of issues, and help petition starters and other organisations pay for amazing tactics and actions. We want our campaigns to win – not make money.

Importantly too, unlike all of the commercial petition websites, 38 Degrees runs on a clear set of values, we’re actively working to make the UK a better place. 38 Degrees is independent of all political parties, and upholds values of freedom, democracy, peace, human rights, community, equality, fairness and sustainability. We won’t host racist, homophobic or discriminatory petitions.

Tragically, most commercial websites don’t have a clear set of values, and try to opt-out of any responsibility on this by claiming to be ‘impartial’. As such they are making money by creating a more divisive country, we suggest you don’t support them.

So, if you feel passionately about an issue, and would like to start your own campaign, you can do so in a few minutes here.

We have some tips on setting up and managing your campaign here.