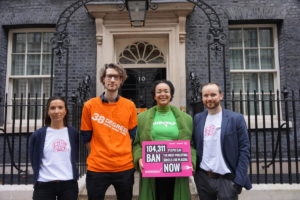 Big news from the campaign against single use plastic! Since the summer, the 38 Degrees community has been campaigning to get the government to ban a bunch of these nasty unrecyclable items – like plastic cutlery and polystyrene food packaging.

More than 117,000 38 Degrees supporters signed the petition – set up by our friends at plastic pollution charity City to Sea – calling on the government to ban the most commonly littered items.

A staggering 51,000 of us then fed into a government consultation on the issue – with the vast majority of us supporting a ban on all the items being considered

What an incredible demonstration of people power from our community! And now we’ve taken that message straight to the government’s front door – with the 38 Degrees team, along with City to Sea and Greenpeace, handing in the petition to Number 10 Downing Street. 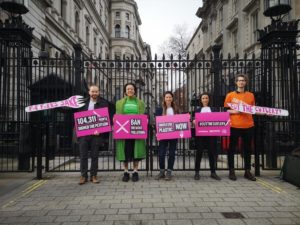 It’s a huge show of public support for the ban and a great step in the right direction, but the fight isn’t over yet. Now the government needs to listen – and then respond by going further and moving faster in tackling single use plastic pollution.