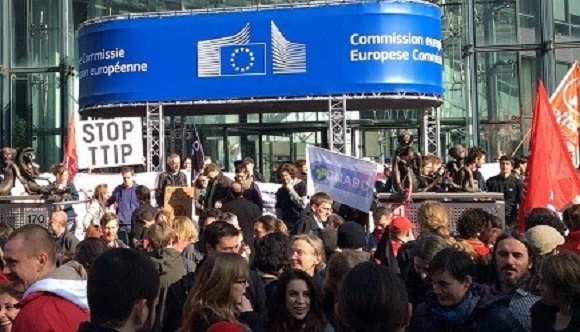 Right now, officials in the US and EU are secretly negotiating a hugely influential and dangerous trade deal which would put the profits of big business ahead of our welfare, health and environment.

It’s called the “Transatlantic Trade and Investment Partnership”, or “TTIP” for short, but in reality it’s more like a Christmas-list for big business. The negotiations are shrouded in secrecy, but leaked details suggest the deal will:

– Stop future governments from rolling back privatisation of our public services, such as the NHS, energy companies, or the Post Office.

– Relax the rules which protect consumers, our environment, our welfare and health services, to much weaker US levels.

38 Degrees members have a strong track record of standing up to big business and government. If we decide to, we have a chance to stop this agreement in its tracks – derailing the negotiations and making sure the things we care most about are protected.

Should we launch a campaign to stop the irreversible damage which the deal threatens?

Increased trade would create some jobs, and could boost the UK economy – but critics have been scathing of the cost and size of these benefits. However, with the economy a key election issue for both David Cameron and Barack Obama, they’ve decided to stake their reputations on the deal.

It’s not going to be an easy campaign to win –  but it is possible. Especially as we’d be joining lots of people and campaigners across the world who’ve already sprung into action.

Should we join the fight? The 38 Degrees staff team sit down every Monday morning to plan out the week ahead and decide on how we use staff resources. The most important factor when making those decisions is what 38 Degrees members think.