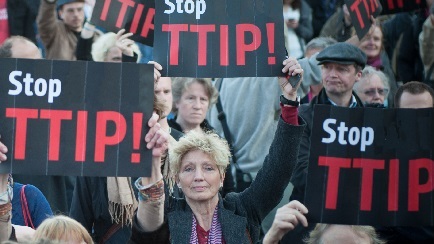 38 Degrees members in Scotland are taking action against dodgy trade deal TTIP in huge numbers. Over 21,000 called on Labour MEP David Martin to oppose the deal – and it seems to be working. Martin pushed through a motion in his Brussels group to oppose ISDS, the part of the deal which would see governments sued by companies for lost profits in undemocratic ‘corporate courts’.

But it’s not enough. Leaked documents have shown that the NHS is still at risk – so are all our public services. Attempts to reverse privatisation in the Scottish NHS will be impossible if the deal goes through. And rules protecting our environment and food safety could be fatally undermined, a new report has said.

With less than 60 days to go until the election, and huge changes predicted in constituencies across Scotland, we have hundreds of hopeful MP candidates vying for our votes. Most don’t have a strong position on TTIP – many don’t even know about it! – so it’s a perfect time to remind them, in huge numbers, that this issue should be top of the agenda. Every candidate, from every party, needs to hear our message – stand up to TTIP!

Petitions are growing in every constituency, and you can add your name by clicking the link and and entering your postcode. It just takes a minute. Let’s make sure they can’t ignore this crucial issue!

Only 53% of the public know what TTIP is – we need to spread the word. As well as petitions in every constituency, 38 Degrees members are organising street events for Saturday 28 March. To see what’s going on in your area, click here.

So far events are planned for:

We’ll be posting pictures from across Scotland as the events take place, and tweeting under the hashtag #nottip

See you on the streets!