On Monday 13 April more than 70 people packed into a church hall in Finchley for the ‘Barnet TTIP and environment people powered question time’.
The event, jointly organised by Finchley and Golders Green 38 Degrees Local Group and Barnet Friends of the Earth, was described as the “liveliest so far” by one of the candidates. 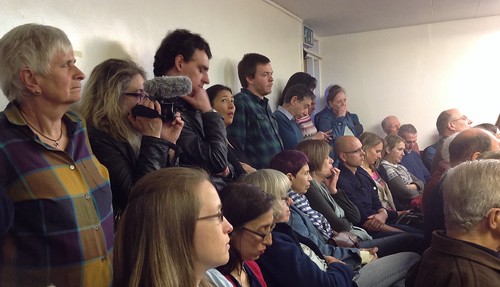 Local 38 Degrees members put forward a number of tough questions to the candidates on TTIP.

Sarah Sackman (Lab) and Alasdair Hill (Lib Dem) both said that they were in support of international trade treaties, including TTIP but held some reservations about the current deal. Sarah said that she was “deeply worried about the potential for corporations to sue governments” and would want to see that aspect removed from TTIP.  Alasdair said he was “concerned about the threat to high EU standards on environmental and food regulations” and wants to see more transparency in the negotiations taking place.
A.M. Poppy (Greens) described TTIP “as a disaster in the making” and “a threat to our democracy”. Poppy reiterated the Green Party line that they are completely opposed to TTIP.
Richard King (UKIP) said that he was opposed to any deal negotiated by the EU but not opposed to a bilateral trade deal negotiated between the UK and the USA.
You can watch a video of the whole event and candidates responses to the questions here.
Want to get involved in future activities?