On Monday morning, the office team sit down with the results of this survey to help decide what’s on the table for the week. Here are the results (click on the image for a larger version): 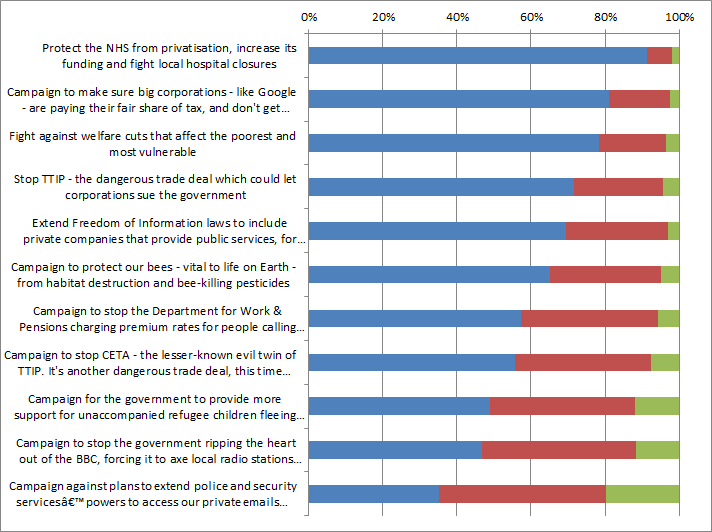 We work best when we decide what to do together. People power shapes what we do together every day, and every week we ask you to decide what we should do next.

Since 38 Degrees started over six years ago we’ve grown together into a powerful movement. There are millions of us across the UK. Part of our strength is our ability to work on more than one issue at a time.

Here’s the list of questions in full for this week’s poll:

Protect the NHS from privatisation, increase its funding and fight local hospital closures

Campaign to make sure big corporations – like Google – are paying their fair share of tax, and don’t get away with tax dodging

Fight against welfare cuts that affect the poorest and most vulnerable

Extend Freedom of Information laws to include private companies that provide public services, for example like Serco who deliver NHS services

Campaign to stop CETA – the lesser-known evil twin of TTIP. It’s another dangerous trade deal, this time between Canada and the EU, which could let corporations sue the

Campaign to stop the government ripping the heart out of the BBC, forcing it to axe local radio stations and much-loved tv shows