This morning we handed in the huge, 27,000-strong petition against the move of the Royal Photography Collection from Bradford’s National Media Museum to the V&A in London to the headquarters of museum bosses.

Despite the pouring rain –  and the museum staff being reluctant to accept the petition at first – we managed to successfully deliver the petition into the hands of the Personal Assistant of the boss of the Science Museum Group, who’s in charge of the decision – leaving him in no doubt where the people of Bradford stand on this. 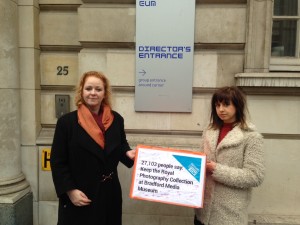 We delivered this petition ahead of the crunch national board meeting later today, that will ultimately decide the fate of the collection.

The petition calls on museum bosses to stop the move of the collection from Bradford to the wealthy capital and halt further plans to ‘downgrade’ this national museum.

“The imbalance in cultural spending between London and the rest of the UK is inexcusable as it is. This move will only exacerbate that imbalance. The UK’s national collections are supposed to be or the benefit of all its citizens, not just the minority who live in London and the South East.”

Let’s hope the museum bosses keep the 27,000 people who signed the petition in mind as they make their final decision!