TTIP: Bending the ear of the US President

If President Obama hadn’t heard of 38 Degrees yesterday, he has today. Thousands of us chipped in to get an open letter to him about TTIP, the dangerous EU-US trade deal, in the newspapers. [1] Today, the letter, signed by 140,000 of us, is splashed across the Guardian and Telegraph. This is what it looks like – it’s hard to miss! 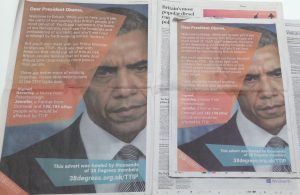 The US President will be meeting David Cameron and they’re sure to discuss TTIP. [2] The deal reads like a wish list for big corporations. It could lower the quality of our food, stop us removing private companies from our NHS and allow big businesses to sue our government if they don’t like our laws. [3]

Obama doesn’t have long left as President, so he’ll be thinking about leaving a good legacy. Hopefully our letter will have caught his eye over breakfast and helped him realise just how toxic TTIP would be to his legacy. If he delays or stops negotiations, it would be a chunky spanner in the works for getting TTIP passed.

Sometimes it’s hard to imagine how each of us, sitting on our own at home, can be heard by people in power. But it’s moments like these, when we bend the ear of the US President, that remind us just how powerful we can be when we pool our resources.

38 Degrees only works because hundreds of thousands of us come together on the issues we all care about to bring about real change. Thank you so much for donating to put the letter in the papers.

Thousands of 38 Degrees members, along with other campaigners, have brought this dodgy trade deal out of the shadows. [4] And together, we’ve put roadblocks in front of this awful deal every step of the way. [5] TTIP threatens so much of what’s most precious: our NHS, our democracy, our public services. Let’s keep working together to protect them.

[2] The Independent: Mr Obama is due to visit both the UK and Germany where he will discuss a variety of topics:
http://www.independent.co.uk/news/world/americas/brexit-barack-obama-will-offer-candid-view-as-a-friend-that-uk-should-remain-in-eu-a6984991.html

[3] TTIP – The Transatlantic Trade Investment Partnership. It’s a complicated name, for a dodgy trade deal. It’s easy to get confused in all the detail, but there are some helpful resources out there to understand what the deal is, and why it’s bad. It’s basically an EU-US trade deal that’s currently being negotiated. It’s been criticised for a number of different reasons – as a threat to our NHS, our food standards, animal welfare and our democracy. Many 38 Degrees members have been in touch to ask for further information on the deal, so here are some news articles and comment pieces you might like to read:
https://home.38degrees.org.uk/2014/10/12/information-on-ttip/

It might seem strange to talking about a trade deal being negotiated in the EU while the EU referendum is going on. When it comes to TTIP, nothing’s certain. But as negotiations on the deal are going on right now we need to keep on having our say. These articles gives some examples of what could happen to the UK’s involvement in TTIP if we vote to leave the EU:
The Independent: No, we can’t protect ourselves from TTIP by leaving Europe. Here’s why:
http://www.independent.co.uk/voices/no-we-cant-protect-ourselves-from-ttip-by-leaving-europe-heres-why-a6853876.html
The Guardian: US warns Britain: If you leave EU you face barriers to trading with America:
http://www.theguardian.com/politics/2015/oct/29/us-warns-britain-it-could-face-trade-barriers-if-it-leaves-eu

Leading independent barrister and EU specialist, Michael Bowsher QC, was commissioned by Unite the Union to produce a legal opinion on the potential impact of TTIP on the NHS. In his advice he said that TTIP poses a “real and serious risk” to the NHS. He’s said that if the deal goes ahead as it is, privatisation of our NHS could be irreversible. A full copy of the advice can be found here:
http://www.unitetheunion.org/uploaded/documents/MBTTIPAdvice20111511-25674.pdf

[4] A number of different group across the EU and in the US have been campaigning against TTIP. In November 2015 a three million strong petition was handed into the EU Commission:
The Independent: TTIP: Three million people sign petition to scrap controversial trade deal
http://www.independent.co.uk/news/business/ttip-three-million-people-sign-petition-to-scrap-controversial-trade-deal-a6680411.html

[5] 38 Degrees members have piled on the pressure at every opportunity where MPs or MEPs have been discussing TTIP. David Cameron said he wanted TTIP agreed by the end of 2015 – but it’s 2016 and nothing’s been agreed yet – and that’s in large part because of people-powered pressure.
The Independent: Controversial TTIP trade deal between Europe and the US to be agreed within ‘the next six months’:
http://www.independent.co.uk/news/world/europe/g7-summit-controversial-ttip-trade-deal-between-europe-and-america-to-be-agreed-within-the-next-six-10306342.html
Last summer, MEPs had their first vote on TTIP. It had to be delayed because together with campaigners across Europe, 38 Degrees members kicked up a huge stink and forced MEPs to oppose so many different parts of it. It eventually passed, but over half of the UK’s MEPs voted against it:
https://home.38degrees.org.uk/2015/07/08/ttip-who-voted-for-what/
And the first time MPs had a chance to debate TTIP, thousands and thousands of 38 Degrees members wrote to our MPs to ask them to represent our opposition:
https://home.38degrees.org.uk/2015/12/11/38-degrees-members-call-on-mps-to-speak-out-against-ttip-in-parliamentary-debate/