My name’s Emma, I’m part of group of 38 Degrees members in Loughborough who meet regularly. For the last 3 months we’ve been campaigning to get the bus stop reinstated at our local hospital. The bus route was axed last year – even though it’s a vital service which local people relied on. 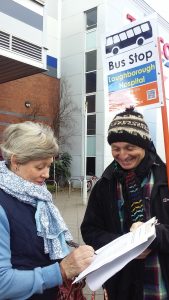 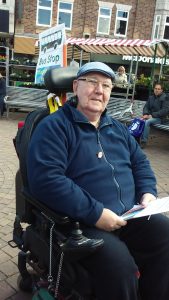 We’ve received a lot of support from local residents, community groups and councillors, as well getting attention from local media. At one of our recent action days our campaign was feature on local radio which you can click on the link below to listen to. (1hour 15minutes in) http://www.bbc.co.uk/programmes/p03pgrcj

Earlier in the month we met with our MP, Education minister Nicky Morgan about the issue along with the bus company, Leicestershire Partnership Trust and West Leicestershire Clinical Commissioning Group. Because we’d done our research we were aware of all of the issues that were raised about the bus stop,  and were ready with a series of suggestions for potential solutions, that were met with a positive if slightly surprised reaction (I think they were expecting confrontation rather than collaboration!).

Well, the bus company are due to meet with the council and if we can prove there’s a demand, the bus company will ‘consider’ reinstating the stop. Ideas were also floated (not by us) about the possibility of raising money either through public donations, or from grants from charitable organisations to allow the hospital trust to buy a bus (about £100,000 apparently!) and run a specific hospital service, driven either by volunteers, or by Kinch drivers if passengers are charged (in order to cover the costs of paying a driver/refuelling). Kinch offered to carry out maintenance of such a vehicle for free should that be an option.

Now we’re playing the waiting game, waiting for the bus company, the hospital trust and our MP to carry out their end of the bargain. But the reception to our request for the stop to be reinstated was positive and open to suggestions. If we can show there is a demand for a bus stop and the council are willing to make minor alterations to the road to allow the bus to exit and turn round easier, then Kinch are willing to consider reinstating the bus.

So, if you want to support our campaign, and help us reinstate this vital service,  you can by clicking on the link below and signing our petition.