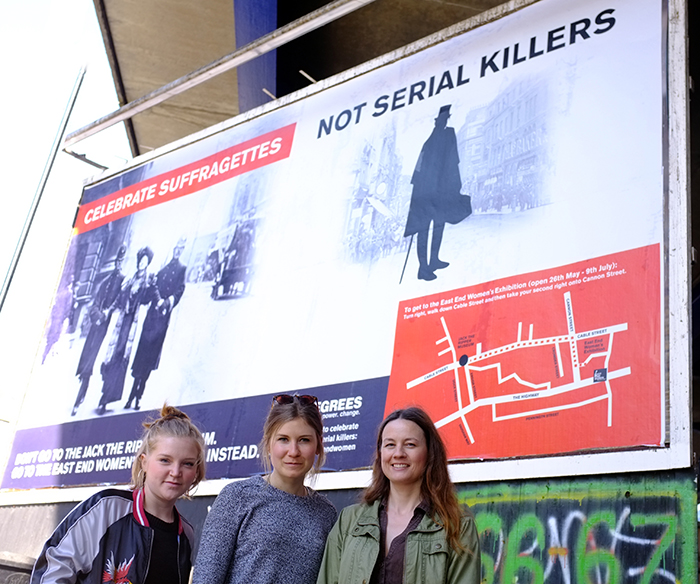 38 Degrees member Becky Warnock who started the petition, along with Abbie Gillgan and Bethan Lant from the East End Women’s Collective.

A new billboard will be unveiled today seeking to mock the controversial Jack the Ripper museum and draw people towards a new pop-up museum ‘East-End Women: The Real Story’, which opens on Friday.

The Jack the Ripper museum originally applied for planning permission to build “the only dedicated resource in the East End to women’s history”. Following the decision to grant permission, the permission was used to open as a museum dedicated to the crimes of a serial killer.

Hundreds of 38 Degrees members then chipped in to fund a rival new pop-up museum. It has been built by the East End Women’s Collective, a group of local women who gave up their time to research and curate stories of inspirational women from the East End.

Today, after gaining 13,000 signatures and over £6000 in donations, Becky and Abbie from The East End Women’s collective will unveil a billboard advertising the “The museum the East End was promised”.

Speaking ahead of the unveiling of the billboard, campaigner Abbie Gillgan, said:

“We came together in response to the Jack the Ripper museum.  Violence towards women is not a series of mysterious events that happened 130 years ago; it’s the lived reality of many women throughout history and today, and should not be reduced to a form of entertainment for thrill seekers.

“The history of East End women is a diverse and inspiring one, and cannot be reduced to one of victimhood. We want to respectfully remember women who have been and still are victims to violence, and celebrate those who have stood up against it throughout history: women for whom we have a lot to thank.”

Speaking ahead of the unveiling of the billboard, Robin Priestley – Head of Campaigns By You at 38 Degrees, said:

“This week, thanks to this incredible people-powered campaign, the East End will finally get the museum it was promised. Becky, Abbie and thousands of 38 Degrees members from across London have said one thing loud and clear: we should be celebrating suffragettes, not serial killers. From this week, we can finally do that.”

The pop-up museum “East-End women: The real story” is located at St George in the East Church, E1 0BH.

Opening times from the 27th May – 9th July are as follows: