We asked: If we did a national stunt, which one would you prefer it to be?

39% of respondents voted to project the documentary onto Parliament 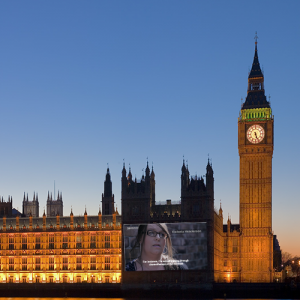 So – we’re going start by projecting the documentary onto Parliament!

Our NHS is in trouble. It doesn’t have the money it needs to survive, so Health Minister Jeremy Hunt is getting ready to cut and close local services to save cash. Whether you need chemotherapy, a prescription for antibiotics, or a hip replacement, this’ll affect us all.

Public opinion is starting to turn against Jeremy Hunt’s plans for the NHS. But if we want to stop these cuts, we need to make sure everyone knows about them. That’s why thousands of us chipped in for a documentary that tells the human story of the NHS funding crisis. A million of us have already watched the documentary. But if we want Jeremy Hunt to really feel the heat, we need to make that more like ten million.

The 38 Degrees office team will sit down this Wednesday to decide how we’ll get millions more people watching the NHS documentary.

There’s so many ways that we can make sure everyone sees the NHS documentary. We can organise screenings across the country, or make thousands of DVDs and hold screening parties at our houses to show friends and family.

Or, we could decide to put up massive screens in Parliament Square, projections on Westminster, or buy adverts in Jeremy Hunt’s constituency.

We make the best plans when all of us have our say. That includes you. The documentary has already been seen by a million people, and that’s because thousands of us chipped in for it, then shared it with our friends. We’ll only reach millions more people if we work together again.

It’s hard to feel like each of us could make a difference on our own – but that’s why there are millions of us. From piling pressure on MPs to chipping in for this documentary, we’re stronger when we work together. Our NHS is always there for us when we need it the most. Let’s work together again to protect it.