People-powered plan for the 2017 General Election

I wasn’t expecting it when Theresa May announced a snap election last week. And I know I wasn’t the only one. But since then, 38 Degrees has moved fast to decide what we should do between now and election day, to stand up for what we believe in.

Hundreds of thousands of 38 Degrees-ers, across the country, have voted in surveys and joined focus groups and conversations.

There’ve been two rounds of surveys. The results to the first one were published on 26th April – you can see them here. On the basis of those results, the staff team sent out a shortlist of options in a second survey, on 28th April. You can see a copy of that survey here. The results are below.

It’s been my job, along with the rest of the 38 Degrees staff team, to look at what you’ve told us, count up the votes and weigh up the options. On the basis of all that, I think we’re ready to propose a final plan, with 2 key priorities:

1) We’re going to make sure as many people as possible have a chance to vote. That means making sure people are registered and informed, and making sure that there are no barriers to voting on the day. It means helping people who have never voted before, and people who are voting-veterans. This will involve all sorts of things, but some of what we might be doing is:

2) We know that first impressions count. So we’re going to make sure the new MPs who get elected know that there are thousands of 38 Degrees members in their constituency – that we are people they need to listen to. So that from day one of the next parliament, we can hit the ground running – winning campaigns and making change across the country.

In the 28th April survey we had also included a draft option around specifically campaigning against UKIP’s new strategy of turning up the volume on an anti-Muslim message. You’ll have noticed that this option hasn’t made it into the final plan.

We were all agreed that UKIP’s new anti-Muslim strategy was a disgrace. But the survey responses showed that whilst a majority supported a campaign, support was much less overwhelming than for the other two options.Many members raised sensible concerns. Lots of us worried that it could give UKIP more attention and publicity, which could even be to their advantage. Others questioned what targeting one political party would mean for 38 Degrees’ independence. And some of us were concerned that attacking UKIP for their anti-Muslim message could be misunderstood as campaigning against the EU referendum result.

Lots of 38 Degrees members pointed out that there’s more that one way to stand against racism, and to speak up for a Britain where all races and religions are respected. We can challenge UKIP’s new, extreme anti-muslim message, without necessarily making UKIP the focus of a specific campaign.

On balance, having looked at all the feedback and counted all the votes, a campaign against UKIP probably isn’t the best thing for us to focus on. We’ll make a bigger, more positive contribution by putting loads of effort into other priorities like making sure as many people as possible have a vote.

This wasn’t the simplest decision and there were definitely a lot of different opinions to weigh up – I’d be interested to hear what you think about it. 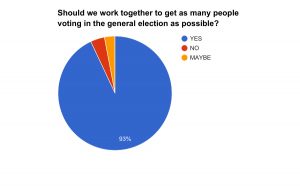 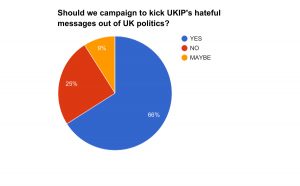 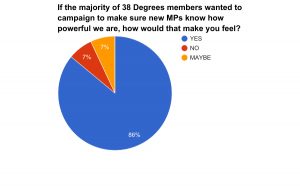