There’s a lot at stake in 2018 – from Brexit to the NHS to our environment. It’s crucial that together, we have a rock solid plan for the year ahead. That’s why over 100,000 of us shared what we think the big challenges will be in 2018, and how we’re going to take them on – and win!

Here are the results:

1. Most of us agree that the funding crisis in our NHS, Brexit decision making behind closed doors and damage to the environment are the most important issues to tackle in 2018. 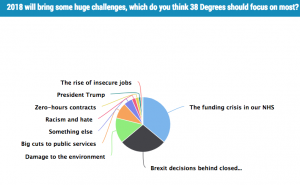 38 Degrees members in Scotland agreed with the above and also prioritised protecting the Scottish Parliament’s powers: 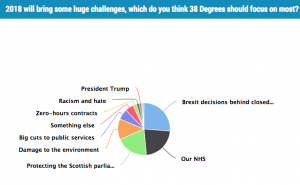 2. Next up, together we decided which campaigns that means we should prioritise in 2018. Brexit, NHS and plastic pollution came top across the UK.

Other important issues are funding for public services and a solution to the social care crisis.

In Scotland, tax dodging also came out as a high priority:

38 Degrees-ers also suggested lots of other ideas for things we could campaign on together – from child poverty, fracking, equal pay for women, and homeless shelters, to the bedroom tax, dyspraxia and animal welfare.

3. The next question, was ‘Out of all the things 38 Degrees already does, what would you like us to do more of, less of, or keep the same’. The results aren’t clear – we’re all split on doing more, less or the same of everything! 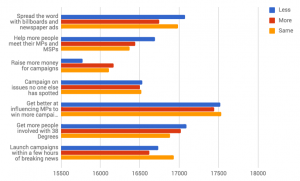 Other ideas of what we should be doing together ranged from organising mass protests, taking legal action against corporations, to organising beach cleans and even challenging people to public rap battles!

4. There was lots of agreement on how 38 Degrees-ers want to take part in 38 Degrees campaigns in 2018. The top ways of getting involved are signing petitions and emailing our MPs or MSPs. Then followed by donating to keep 38 Degrees going and meeting our MPs.

5. And finally, a whopping 90% of people said they felt proud to be part of 38 Degrees!

And here are some reasons why you felt so proud:

“Because it has actually made a difference and government has had to listen to the people.”

“It gives me a voice”

“As a non-Party political entity, it gets things moving. There is no apparent bias”

“Because of how effective it’s been”

“It’s good to be a part of a campaign about something I care about, knowing others care too, and where there are visible signs that the campaign is effective.”

“Because 38 Degrees is people power and, embarrassingly for the UK, sorely needed”

“Because it is one of the fews ways of building and achieving collective action with palpable, positive effects not just on is as isolated individuals but for entire communities, the country and the world.”

38 Degrees-ers come from all different walks of life and from all across the UK, but this people-powered plan for 2018 shows that there’s so much that we agree on. Together, we want to make the world a better place and we’re convinced that the more of us who are involved in the decisions that shape our lives, the better things will be.