Breaking news: Walkers have just announced they’re launching a scheme to recycle crisp packets. [1] It’ll mean fewer crisp packets going to landfill or washing up on our beaches. And it’s down to you. 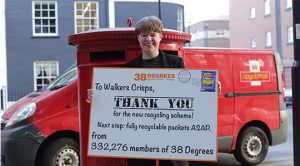 Walkers bosses have taken this huge step forward because of the hundreds of thousands of us who’ve been demanding action. There’s been a huge petition, thousands of messages all over Walkers’ social media, and hundreds of us made the headlines by posting our packets back to Walkers. We’ve really piled on the pressure. [2]

The new scheme will put special crisp packet recycling points across the country. [3] It’s not perfect – Walkers need to do more to make their packets properly recyclable everywhere. But this is a huge step forward.

The Sun: Walkers to offer free recycling scheme after hundreds of Brits post empty packets back to snack firm

[3] The press release from Walkers says: “People will be encouraged to either drop off their packets at one of the hundreds of public access collection points that will be developed all around the country or alternatively post them for free directly to TerraCycle for recycling. Once the packets have been collected they will be cleaned, shredded and turned into small plastic pellets which will then be converted into useful plastic items, such as benches and fence posts. Under the scheme, developed in partnership with the recycling company TerraCycle, all crisp packets will be accepted. The new recycling scheme will be up and running from December this year and full details of exactly how it will work and locations of the nationwide collection points will be announced nearer the time.”

Moments like this show how powerful we can be when thousands of us group together – small actions like signing a petition, sending Walkers a tweet, posting a crisp packet, it all adds up and makes us a force to be reckoned with. And that’s what 38 Degrees is all about, it’s named after the angle at which snowflakes gather to form an avalanche. So thank you for being part of it.