Some people with powerful voices in politics are behaving badly. They’re threatening violence, using racist language, and exploiting our divisions. It looks like things are already getting worse in this election.

In a recent poll of over 50,000 38 Degrees members, over 98% of us said that we think the language and behaviour of powerful people in politics is getting worse. [1] This matters. When powerful people say hateful, violent, and racist things, it can make our politics toxic, and lead to more of us feeling shut out than ever before. With violence and hate crime on the rise, our political leaders need to show a better example.

This election, 38 Degrees members are working together to turn the tide on this kind of toxic politics and break down the barriers to more of us getting involved. We’re running a campaign focusing on two fronts:

Together we’re launching a massive effort to get more people from under-represented groups voting in this election.

We’re working together to show that the public want a better kind of politics – and are calling on those with power to deliver it. 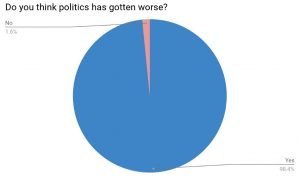