38 DEGREES BUDGET RESPONSE: THE CHANCELLOR MUST DO BETTER 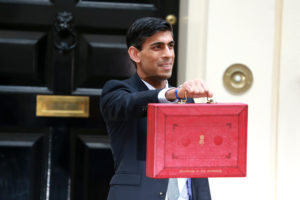 Yesterday’s budget was packed full of announcements by Chancellor Rishi Sunak – but there were also big gaps in support for the NHS, for people struggling to make ends meet, and for a greener future. Here’s how it impacts some key 38 Degrees campaigns:

Universal Credit: The future of the £20 boost remains uncertain

The £20 Universal Credit uplift will be extended for just six months. For many of us, the extra £20 is a vital lifeline, and this was a golden opportunity to make it permanent. A six month extension is just not good enough and leaves millions facing further uncertainty in six months’ time.

But whilst it’s not the result we wanted, we can also feel proud. This six month extension might never have happened without the immense public pressure that thousands of 38 Degrees members helped create. Together we:

The extra £20 a week can be the difference between putting food on the table and going hungry during this crisis. And with furlough set to end at the same time as the extended boost, this vital lifeline needs to be made permanent. For now, we should all feel proud that we came together to fight – and we’ll do it again in six month’s time.

Climate: A far cry from the green revolution we need

How well did the budget do on climate? The short answer – terribly.

There were some welcome announcements on green savings accounts and a new infrastructure bank to support green investments. The Bank of England’s mandate will also be updated to reflect the importance of environmental sustainability.

However, with so much at stake, the budget failed to deliver commitments that match the scale of the climate crisis. Nor did it reflect the government’s recent rhetoric about building back greener:

This budget just doesn’t deal with the climate crisis. It doesn’t tackle the crisis head on. That’s a missed opportunity because it could have created hundreds of thousands of green jobs. But that change won’t happen on its own – the UK government must deliver real climate solutions in future.

The NHS: a huge hole in the budget

It’s hard to believe that after pulling our country through this pandemic, putting themselves and their families at risk, NHS staff barely got a mention. But those of us reading this won’t be ready to give up. And with planned NHS pay talks just a few months away – it’ll be another chance for us to push for the best deal possible for our frontline heroes.

And we aren’t starting from scratch. Over the past 12 months we’ve done so much to support those who care for us when we need it most.