On Monday morning, the office team sat down with the results of this survey to help decide what’s on the table for the week. Here are the results (click on the image for a larger version):

The poll also checked in on support for 38 Degrees’ role in the EU Referendum – to stay neutral, challenge the spin on both sides and make sure that everyone in the UK has enough information to make an informed choice. An overwhelming majority of members still support this strategy. 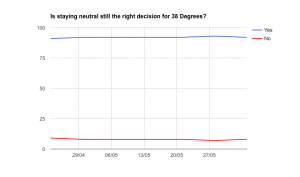 (You can track the results each week here: https://home.38degrees.org.uk/category/weekly-poll/)

We work best when we decide what to do together. People power shapes what we do together every day, and every week we ask you to decide what we should do next.

Since 38 Degrees started over six years ago we’ve grown together into a powerful movement. There are millions of us across the UK. Part of our strength is our ability to work on more than one issue at a time.

Here’s the list of questions in full for this week’s poll: