On Wednesday this week, 38 Degrees members met with Humza Yousaf MSP, the Scottish Government’s Transport Minister, to deliver a nearly 20,000-strong petition calling for action on ScotRail. Our members were fed-up of trains running late, tickets being too expensive, and journeys being cancelled.

By Thursday, we were all over the news – on TV, radio, and in almost every paper in the country.

Below, you’ll find just some of the coverage we received for our campaign to sort out Scotland’s trains. If you want to be part of working out what we do next, click here to take our survey. 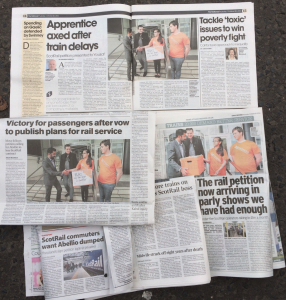 Some of the coverage we received in this week’s papers

The National – Teenager says ScotRail train delays cost him apprenticeship, as petition is handed over

If you want to be a part of deciding how we take forward our ScotRail campaign, click here to take our survey. 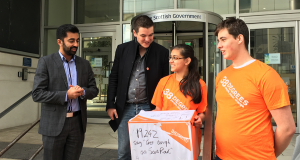