Last week on the 26th April, 38 Degrees folk handed in an open letter addressed to Ruth Davidson and Scottish Conservative MPs asking them to stand up for Scottish fishing.

Together we handed the open letter to Peter Chapman MSP, Scottish Conservative Shadow Cabinet Secretary for Rural Economy, outside the Scottish Parliament building in Edinburgh. 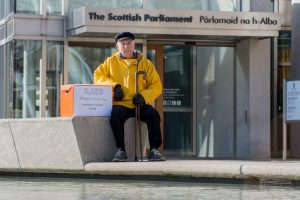 More than 2,500 of us from fishing communities across Scotland signed the open letter to the Scottish Conservative leader, Ruth Davidson. It calls for control over fishing to come to the Scottish Parliament, not Westminster, after Brexit.

Tens of thousands of 38 Degrees folk have been working hard to make sure powers over Scottish fishing, farming, food and the environment come to Scotland. We’ve signed petitions, we’ve contacted our MPs, and taken part in a huge survey for a powerful House of Commons inquiry. And we’ve crowdfunded opinion polling which showed 62% of Scots backed our campaign.