Overwhelming public support for the BBC

The government’s finally published the results of the public consultation on the BBC. 177,000 of us told them what we think – and the results show there’s overwhelming public support for our national broadcaster. The message was loud and clear: the public backs our BBC and doesn’t want politicians to meddle with it. 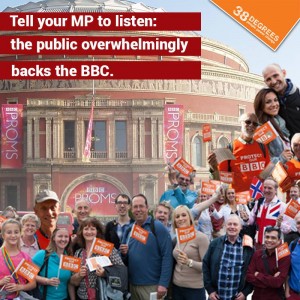 There’s no doubt where the public stands. And it looks like the government might find that a bit inconvenient. John Whittingdale, the minister in charge of the BBC, released the report with a single message on Twitter, burying it underneath piles of other announcements.

Together, we need to keep up the pressure. Ministers listen when MPs ask tricky questions – and this week, Whittingdale will be planning what to do next. So this week, 38 Degrees members are making sure our MPs hear it from us directly. It could make them speak up for the BBC, and that could make Whittingdale back down.

Click here to ask your MP to read the report

38 Degrees members have been making waves since the government threatened to make big changes to the BBC. Nearly 400,000 people have signed a petition to protect the BBC and thousands of us fed into the consultation, making it one of the largest ever. Politicians have tried to write us off as ‘left wing’ or ‘zombies’ but we’ve shown that our people power can’t be ignored. Let’s keep up the pressure to protect our BBC.